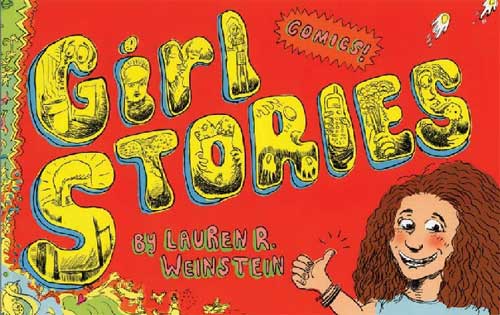 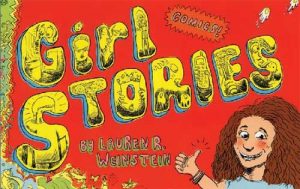 Before I write another word, I have to say this: I love Lauren Weinstein’s coming-of-age collection of comics Girl Stories. I think it’s relatable, funny ,and in some instances, super clever. I like the raw honesty of her character, a self-aware art chick who still plays with Barbie dolls, but understands all the problems with Barbie dolls and doctors her collection to make it more punk rock. Meanwhile, she has that brand of self-loathing so familiar among girls who grew up in the 1990s. I like that her drawings have a sort of crass R. Crumb-Lynda Barry-ness to them, while also maintaining a very signature style.

But. I say all of this as though I’ve read this collection in a vacuum. As if I haven’t read this collection of comics, heard this song, watched this movie and recorded episodes of this TV show about one katrillion times in my adulthood: Smiths fan awkwards her way through her teen years.

The main character here is flirting with popularity. One minute she’s got it; One minute she’s clinging to her nerdy best friend since second grade. She’s tormented by the popular kids, particularly that dick Glen who seems to hold the yoyo string that controls her social ascent. There’s a junior high dance, a move to high school, a flirtation on a bus, and a multi-part incident involving something super gross that someone put in Glen’s locker.

I can no longer differentiate between what is good, what is original, and what is derivative anymore. I’m starting to think that even though we are all unique and precious flowers, we all had versions of the same upbringing and now that story has been told and told and told. Yes, high school boys are dicks. Yes, we had a first love and he was probably a skateboarder. Yes, we took fashion stances that tried too hard. Yes, we wished that Morrissey would disavow his celibacy for a single round of 7 Minutes in Heaven.

No voice sounds fresh anymore. No story more open-wounded than the next. We grew up in a certain decade, we wore big flannel, we made some bad and some good choices, and then we stepped out of the way so we could navigate new areas and the next generation could take its shot at it all (wear whatever, make choices, move on).

When these comics first went live, I bet they bit into a really raw space. I bet girls read them and laughed and related, passed them on and were inspired. I bet they dug the Barbie dolls out of the closet and gave them punk makeovers. I bet they considered the unique torture of a handsome asshole. In fact, this must be true because Weinstein includes a section at the end featuring readers’ responses to a comic she did about body image. Those responses range from “Am I fat?” to “Thank you.”

But now, read so much later, after so many people have been here and done this and were perhaps even inspired by Weinstein, it just feels like slipping into the flannel one keeps around out of habit. It’s comfortable. It feels good. It makes a lady happy. But it’s lost a lot of the power it must have once held. I don’t know what any of this means. That Weinstein and the first makers of 1990s angsty girl art did what they did so well that now everyone has done it, thus diluting the water?