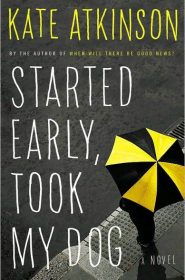 In Kate Atkinson’s Started Early, Took My Dog:l, disparate characters wheel through their respective universes, gently tapping into each other from time to time. What they don’t do is ever coalesce into a satisfying story.

I decided to read this book after reading several reviews, a few written by notable writers, that praised it for its intricacy and its storytelling.

It’s true that Atkinson handles the storyline deftly, picking threads up and setting them down with expert timing. But as a mystery, “Started Early” fell far short of enthralling.

Thirty-five years after a prostitute is found murdered – with the door locked from the inside – old ghosts rise again to haunt the police, social workers, and reporter who responded to the grisly scene. Naturally, that gives rise to counteracting forces, dark and possibly violent people who’d just as soon let sleeping dogs lie.

Something about “Started Early” made it feel like it was a story that had been running before the book actually started and would continue going on even after the final page. That’s probably because one character, private Detective Jackson Brodie, has appeared in Atkinson’s other novels, but I also think it says something about Atkinson maybe being a little too clever for her own good in terms of how she tries to keep readers in the dark.

So, far all I know, Atkinson could be a writer’s writer, but “Started Early” wasn’t really a reader’s read.