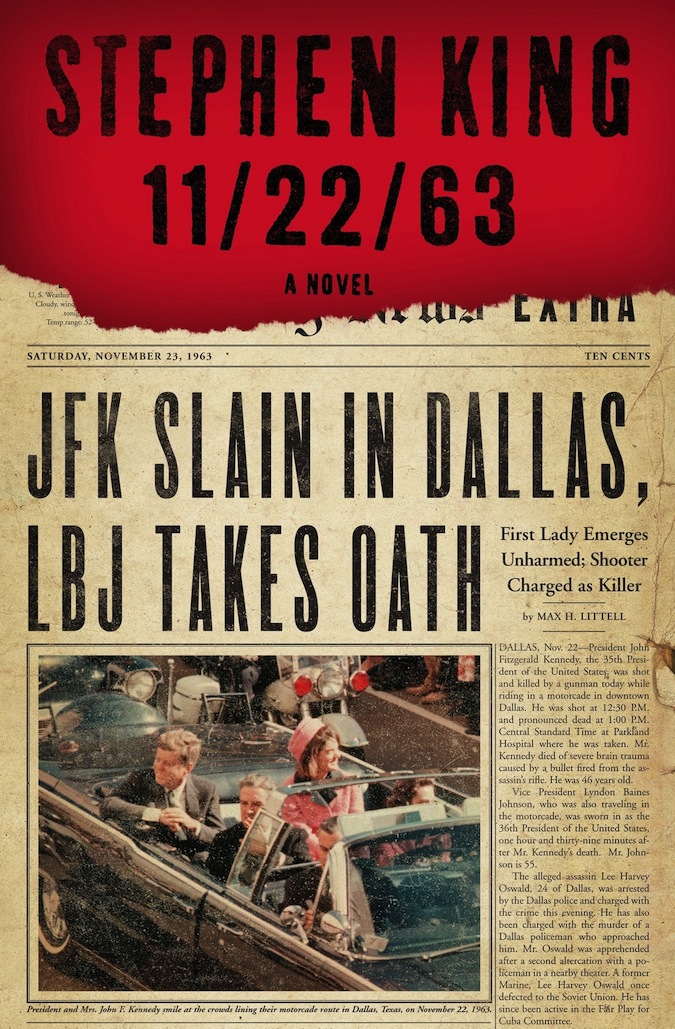 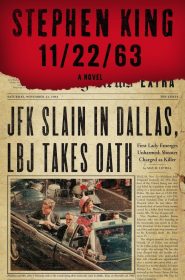 Stephen King’s 11/22/63 probably could have been a cute, if cliched, little time travel romance novel if it’d clocked in at about 400 pages. Sadly, it comes in at over 800 pages turning it into an annoying, insufferable doorstop of frustration.

Ugh. I’m of the belief that it takes a certain kind of arrogance to put readers through 800 pages of a story. Sure, some stories are that large and need that kind of expanse to really come to life. In my experience, however, this is not nearly as often as 800+ pages books are foisted onto unsuspecting readers. I’m fond of spouting that an author has to earn every sentence after 400 pages. King doesn’t earn one word after 400 pages.

What we have here is Jake Epping, a 35-year-old English teacher in Maine in 2011. One day Al, the owner of the local greasy spoon Jake is fond of, asks him for a favor. The favor? Travel back to 1958 through a weird time-space continuum rabbit hole in the back of the diner and save President John F. Kennedy from assassination. Does Jake do it? Of course he does!

Warning the next bit is probably a bit SPOILER-Y. I say a bit because the plot is so ridiculously predictable that I’m not sure how you can spoil it too much. I mean it’s pretty obvious from the get go that while spending five years in the 50s and 60s there will be a love interest, there will be fingernail-biting last minute will he/won’t he succeed in his mission, and then, of course, how this all affects the future.

The only way this book could be less predictable is if King had included an outline of the entire novel in the first chapter.

So, anyway, after more premise-setting than is necessary, Jake travels back to 1958 where he assumes the name George Amberson. While puttering about Derry, Maine he fixes the life of one of his adult-GED students, and after that high tails it to Texas, after spending a bit of time in Florida making money off sports bets and an enemy out of the local bookie.

Once he lands in Texas he decides Dallas is the suck and settles in the small town of Jodie, Texas where he end up an English teacher at the local high school and spends years ingratiating himself to the locals of the small town. Then he meets Sadie, after she trips over a chair and he catches her, managing to grab her boob in the process.

Are you barfing yet?

Okay, well then about how about the fact that King describes Sadies as a six-foot (or more) blonde-haired, blue-eyed, curvaceous beauty who weighs about 150 pounds. I don’t know what kind of Sci-Fi world you have to live in where that’s curvy, but whatever. It doesn’t help that later in the book Jake/George makes a comment about how hard it is to lift Sadie because she’s so heavy. Are you fucking kidding me?

Speaking of the AYFKM moments, there is the most ridiculous sex scene ever. King seems to think women have screaming orgasms the first time they ever have sex. As if.

You’re probably wondering what any of this has to do with the assassination of Kennedy. Oh, that would be nothing. However, it is the best and most engaging parts of the book. The rest of the book is exhaustive accounts of Lee Harvey & Marina Oswald’s life. It’s as though King wanted to cram every single thing he learned in his research into the book at the peril of the actual story.

It’s frustrating and boring, and that’s nothing to say about how repetitious so much of the book is. Jake/George continually tells us how the past harmonizes (characters have the same name, similar cars etc.), how there’s a butterfly-effect when you change things in the past, and that the past is obdurate in that it doesn’t want to be changed.

The problem is that some of the stuff is good and interesting but it’s buried in so much crap the reader doesn’t care about or need to know that the interesting bits suffer making the whole ordeal of reading the entire thing kind of unpleasant. What a disappointment.