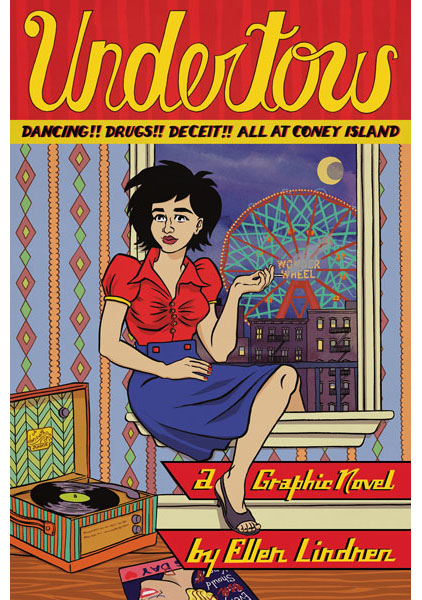 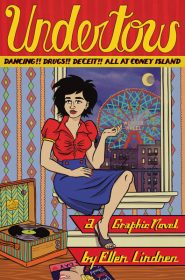 You know those movies from the 1960s that are all pointed bosoms, covert ciggies and dirty dancing with boys who favor slicked hair and switchblades. Cautionary tales. Second base bookended by car races. Where a lesser-known character is sacrificed to present a life lesson:
“Hey, girls. Don’t get all whack from the flask and try nightswimming at Coney Island.”

So starts Ellen Lindner’s charmingly — I’m not sure “campy” is exactly the right word, but it’ll do in a pinch — campy graphic novel Undertow, a cautionary tale starring a tight-knit group of South Brooklyn neighborhood kids with varying chances of busting out of the burrough and finding something bigger. But first the sacrifice: Rhonda sneaks out of her bedroom, past her too-drunk mom, to meet up with Estelle, a pretty girl who has hitched her star to the wrong horse. Her boyfriend Lucky used to be just a good time guy; Now he’s gotten in too deep with some hard core drugs. Estelle sometimes has to hunt him down in completely disgusting places.

The girls take swigs of booze and end up at their secret spot at Coney Island. While Rhonda is on the beach teaching herself the cha-cha, Estelle goes for a fatal swim.

Meanwhile, a good looking Ivy Leaguer is trying to infiltrate the group. He’s studying social work and as part of his studies he’s trying to gain the trust and conversation of this pack of kids. Rhonda’s older brother, a former gang leader, bites. He would like his little sister — who has so much potential — to be involved with this guy.

Sure enough, she finds herself opening up to him. Turns out: with a photographic memory, like she has, Rhonda can be more than the nurse she aspires to be. HECK. SHE COULD EVEN BE A DOCTOR! But first everyone will be tested on the Coney Island boardwalk. And is it sunny with a chance of love?

This has all great corniness of “Teenage Crime Wave” meets a swoon-making serialized comic from the romance section.