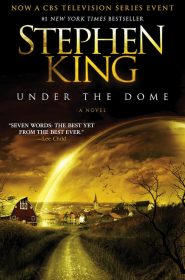 You may have seen commercials for “Under the Dome,” a miniseries starting in June based upon Stephen King’s novel of the same name. The premise got my attention right away: a dome suddenly, and without warning, encompasses a small town and mass chaos ensues.

This series is pretty much designed for me, so for the past two weeks I’ve been making my way through Stephen King’s 1072-page behemoth. You should be very impressed that I finished it in two weeks, not only because it’s 1072 pages, but because this isn’t a small book with large print. I feel like these 1072 pages are really 1500 pages of a normal book, so I’m pretty proud of my two-week readathon.

It didn’t hurt that this was actually a quick read. Stephen King knows how to create suspense, curiosity, and disturbingly bad, but completely satisfying, characters. And he really likes to kill people.

Under the Dome begins on October 21, the day a clear dome suddenly surrounds the small town of Chester’s Mill, Maine. No one can get in or out, and no one can actually see the dome, which makes for some disastrous airplane and car crashes. But the dome is the least of the town’s worries. In true Stephen King fashion, the people in Chester’s Mill are way more frightening than a stupid, mysterious barrier. This is pretty much Lord of the Flies but with adults.

It doesn’t take long for the town to break down after the dome appears. Power-hungry James “Big Jim” Rennie, the town’s second selectman, sees this as an opportunity to gain even more control over the townspeople, while his son Junior starts cracking and causing a lot of trouble. Dale “Barbie” Barbara, a former Army captain turned fry cook, is put in charge of the town through an edict issued by the President of the United States, but that doesn’t sit well with Big Jim. Trying not to lose his power, he turns the town against Barbie and conspiracy theories, criminal behavior, and vigilante justice are rampant. The clashes between Big Jim and Barbie, and townspeople on both sides, make up this tale of a town gone crazy.

Stephen King does a great job turning Chester’s Mill into an awful, totalitarian town. Panic is widespread and supplies are dwindling, including the propane that runs generators. All of this is terrifying in and of itself, because there seems to be no end in sight for when the dome will go away, but King takes it one step further and creates abominable characters.

Actually, when it comes to the characters, either people are really evil, with their evil quadrupled because of the dome, or they’re really nice and can’t comprehend the evil doers. There aren’t that many in-between characters, and it’s shocking how many evil ones there are, like the newly appointed police deputies. Big Jim thinks they need more police, so he scrounges up twenty somethings and teenagers, which is just what we need in a crisis – armed, untrained teenagers. These deputies really highlight the mob mentality, and, sadly, even though some of their actions made me cringe, I believed them. I don’t know if that’s because of King’s writing or because there are awful people in the world, but I believed the mob mentality.

I think the pacing in the book also should be praised, because even though this is a long book, full of many characters (there are three pages of characters listed at the beginning of the book), this moves at a breakneck speed. The whole thing takes place over a week, which probably helps with its speed, but nothing here is expendable. Not one thing should be left out because it all works so well. It jumps between characters in different parts of town, sometimes seeing or hearing the same events from multiple perspectives, and I loved it.

The thing I didn’t like as much is the ending. It was just kind of…boring. Everything leading up to it is fabulous. I was nervous, gasping, and scared, but then it just ends. We find out about the dome and why it’s there, but I found it rather simplistic. I wanted it to be more grand and ominous like the rest of the book, especially because the death toll is so large. With that many goners, I want something more.

I still really liked this book and I can’t wait for the miniseries. I’m curious to see the changes they make, because watching the commercial I see younger, prettier people than I saw in my head. Let’s hope not much changes, because this was a fantastic ride.