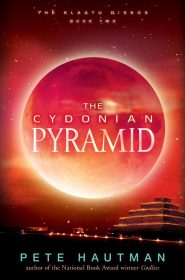 When I met briefly met Pete Hautman last year, I enthusiastically gushed over how much I loved The Obsidian Blade. Looking back, it was one of those embarrassing moments where I talked too fast, too much, and probably came off stalkerish, but trust me, I don’t have the dedication needed to stalk someone. I just thought The Obsidian Blade was one of the most unique things I read last year with great characters, strong world building, and a completely wacky plot. Wacky in the best way possible.

In The Obsidian Blade, we followed Tucker Feye as he jumped through diskos searching for his father. Diskos are disk-shaped holes in the sky that lead to different places in time, but all the places are either sad or dangerous, like New York on 9/11. At the end Tucker finds his father, but his dad is completely different and Tucker has to flee. I won’t say more because I don’t want to ruin it, but my god, what a psycho dad.

Another person we met in The Obsidian Blade was Lahlia, a girl Tucker’s father brought back when he jumped through a diskos. Lahlia was mysterious, quiet, and observing all that happened around her. We didn’t get to know her well, but I had a feeling more was to come with her.

Book two is all about Lahlia, or Lah Lia. The Cydonian Pyramid basically tells the same story, but from Lah Lia’s perspective. I always worry about books that have stories retold by someone else because they can sometimes be stale. After all, we already heard the story. But Tucker and Lah Lia didn’t spend that much time together in the first book, so this story isn’t stale at all. We see what Lah Lia saw and felt, and we actually learn a lot of new things that we didn’t know in The Obsidian Blade.

In The Obsidian Blade, Tucker is pretty much clueless to what is happening around him. He is taken on a wild diskos ride throughout time, but it’s so confusing to him, making it confusing to us. In The Cydonian Pyramid, we learn new things that explain so much more about what happened to Tucker and why. We learn more about the diskos, who made them, and how different people have used them. We learn more about the Lah Sept (where Lah Lia came from) and the politics and ritual sacrifices in that culture. And so many things that seemed small and mundane in The Obsidian Blade are all of a sudden extremely meaningful and enlightening in The Cydonian Pyramid. Putting these pieces together was so exciting and satisfying, like I was finally let in on a secret.

I also really love that we learned more about Lah Lia. I really liked her in The Obsidian Blade, but here I have fallen in love with her. She’s strong, ballsy, and has been through a lot. A lot. Way more than Tucker. She was raised to be a ritual sacrifice, one that she’s supposed to be happy about. It now makes complete sense that she was so quiet in the first book. Who wouldn’t be? Would she just be a sacrifice in this world, too?

One thing I did miss in book two is Uncle Kosh. I had a crush on the motorcycle driving, leather jacket wearing, bad boy but can cook a good meal Uncle Kosh. We do see him slightly in this book, but I wanted more. This is probably because I’m an old lady reading a teen book. If the book were written for adults, Uncle Kosh would be front and center. Maybe if I meet Pete Hautman again I’ll beg him to write a book with all Kosh all the time.

But even without dreamy Uncle Kosh, this book was awesome. I love Lah Lia so much more, and I’m even more fascinated by her society, the diskos, the connection between her and Tucker, and how this will all play out in the final book.

Hautman has created a deranged world, with even more deranged people, and it is still one of the most unique series I’ve read in a long time. It is so different and daring and I have no clue where it’s going, so I can’t wait for the third book in this trilogy.