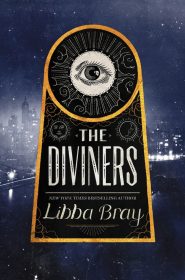 I really liked Libba Bray’s Going Bovine, but stopped reading Beauty Queens, so I was nervous going into The Diviners.

The Diviners is set in the roaring 1920s where Evie O’Neill, an energetic, outgoing, flapper teen, who hates boring old Ohio, gets sent to live with her uncle in New York City after she uses her special talent, reading objects, to turn her small town against her. Evie is “pos-i-tute-ly” thrilled to get sent to the city of Ziegfeld girls, speakeasies, jazz, shopping, and, most importantly, boys.

Evie’s uncle is the curator of the rundown Museum of American Folklore, Superstition, and the Occult, known by most people as the Museum of the Creepy Crawlies. Even though the museum is almost always empty, things get exciting for Evie when her uncle is called upon to help with the investigation of some disgusting, occult-based murders where Evie’s special talent becomes more than just a parlor game.

Besides Evie and her uncle, there are a ton of other characters. There’s an emotionless but hunky museum assistant, Evie’s friend who’s in love with the assistant, a Ziegfeld girl and her “brother,” a young poet and numbers runner from Harlem, the poet’s younger brother, a good-looking pickpocket, a blind homeless man, naughty John, and so many more. You can’t say there aren’t some interesting characters in this book, and most of them have some sort of special talent like Evie.

Having all these characters is quite overwhelming, and some of their backstories don’t really move the plot forward, which on one level was good for character development, but on another I just wanted her to get on with it. But at least I liked the characters. Every one of them. Evie gets kind of annoying with her idiotic “pos-i-tute-ly!” and “you bet-ski!”, but I still liked her.

The murder mystery part of the book was really entertaining, but it gets slowed down with all the character backstories for people who weren’t involved with the murder mystery. I wish more of the people were connected with the murders because a mystery involving dead bodies with feet cut off, eyes cut out, and occult symbols on or near them shouldn’t be overshadowed.

What I really disliked was the historical setting. It felt like Libba Bray had a handout of slang, hairstyles, and clothing she needed to throw in every so often to remind us that this was set in the 1920s. Good historical fiction engulfs me in the time and I never question where I am, but here the setting and references were never strong enough and it could’ve easily been present day.

I still liked this book, but I really disliked how it all came together in the end, because it never really did come together. We do figure out the murder mystery, but the only diviner, person with special skills, who comes into play is Evie. We learn so much about every other diviner, but Evie is the only one who does anything to help solve this murder mystery. I was really disappointed by this. The last twenty pages of the book catch us up on where every character is, and I felt cheated. I learned so much about them and I wanted them to do something, but apparently this book is just the background for everyone. I knew this was the first book in a series, the second coming out soon, but I didn’t expect it to be mostly filled with background information.

I will read the second book, but I hope all the diviners play a bigger role in whatever comes next.