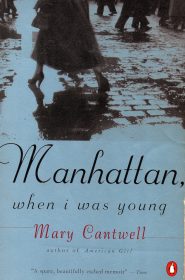 A funny thing happened when I was reading Mary Cantwell’s Manhattan, When I Was Young, a memoir built around the places the writer lived in New York City during the 1950s and 60s. I first decided I wanted to write about all of the places where I have lived in Duluth — and then quickly realized that No I Do Not Want That At All. Which made me wonder: How did she do it without going all Demi Moore-pink bedroom-window open shivering in the corner-Aquanet party with Rob Lowe? Writing about your life with all it’s puckers and pouts is tricky business, something that has escaped me until this memoir.

She starts in Greenwich Village with a college friend in a space that walks out into a garden and sometimes they sleep with the door open. Cantwell has moved to the city to be near her boyfriend, who will later become her husband, a lapsed Jewish man she refers to as B. The recent college graduate begins what will be a long career — with a bit of a hiatus — in the fashion magazine industry. Once they get married, Cantwell and B move to an apartment in nowheresville with the adult luxury of walk-in closets. They windows faced an air shaft and when it snowed, it looked like the flakes were blowing upward. Here she learns to drink, diddle, and entertain. It’s also where the migraines begin and the cure prescribed to her is a psychiatrist. The couple eventually moves back to Greenwich Village, where Cantwell — who enjoys the neighborhood and finds luxury in a certain amount of seediness — feels most at home. They travel to France. She moves from Mademoiselle to Vogue.

At 21 Perry Street they get access to a shared garden and have interesting neighbors and an interesting collection of hipster-literati friends. Cantwell gets pregnant, even though she’s been told by a doctor she’s too thin and anemic to even consider it. Unbeknownst to her, she’s taking a daily dose of birth control pills — which she chucks when she realizes what’s going on. The rest of the world blurs behind her as she prepares to have the baby. And afterward she slides into a debilitating depression, goes back to work, gets pregnant again. Her story ends at 44 Jane Street, near nothing. It’s a big old place where it comes to light that B is banging his secretary and everything crashes down. It’s also where she is living when she begins a long career writing for The New York Times.

This story is lovely and name-droppy and matter-of-fact and sometimes looks like the underbelly of a scab. Cantwell writes with an awareness that this isn’t portrait with a filter thick as a fabric softener. There is grit and there are some major issues with self-assuredness and a hop skip jump from daddy to daddy-like husband. There is sadness and hurt. And maybe, as she’s writing, she’s still feeling the drag from some of this. She never refers to her ex-husband, a prominent literary agent, by name.

She makes the process of unraveling her life and respooling it into a memoir look easy and kind of fun. It’s only when I considered my own life in an old carriage house in East Duluth, tossing a small dish of hot butter at my then-roommate’s head, that I realized I have no desire to revisit the different addresses of my life. There are details that I like — here and there. A place in the West End where I could skateboard in the back door and through two rooms to the front window with its view of water. A place in the Central Hillside had rose-decorated stained glass window. We had a super cool two-bedroom apartment in the East Hillside next door to a middle-aged man who tanned in the back yard with a tiger striped bikini swimsuit not on, but balled up around his twig and berries.

Anyway, I loved this book.