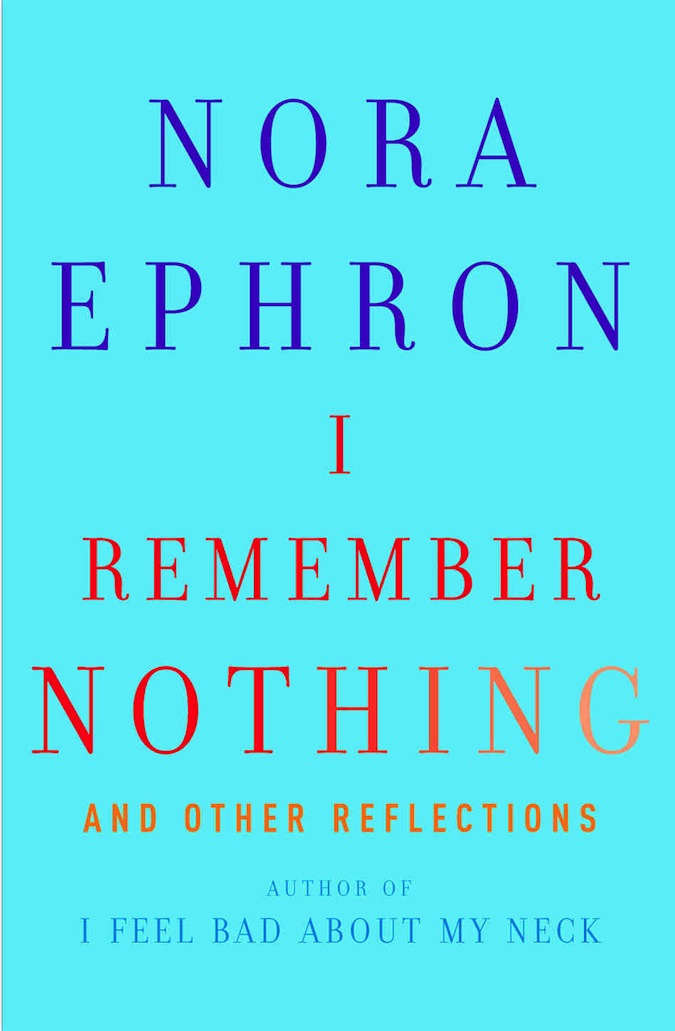 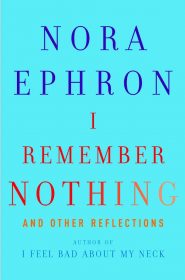 It’s no secret that there are things you can do when you’re famous that you can’t do when you are not. In the case of Nora Ephron, it would be writing I Remember Nothing, finding a publisher, and having it placed in bookstores — and have more than one copy remain there about three years after it was released.

This collection of autobiographical essays, sometimes in the form of lists, includes musings on aging, snapshots of growing up, and thoughts on things like egg-white omelets and Teflon. I do this sometimes, recognize that Published Essayists are really Bloggers Who Received an Advance, but Ephron’s book is the most obvious example I’ve found. Still, I’d put her in my Google Reader. Sometimes she might fall victim to the kiss of Mark All As Read.

Most of the essays are quick-hit opinions, but in about a handful of them Ephron tells a pretty engaging and funny story about getting into journalism at a time when women were immediately directed into the Mail Girl career path, the urban legend of her mother kicking Lillian Ross out of their home, the time she was an heiress, and the meatloaf menu item that was named after her.

I’ve never really had an opinion on Nora Ephron. I’ve liked some of her movies. I think it’s interesting that she was married to Carl Bernstein and then not married to Carl Bernstein. I’m fascinated that she had a friend break up with Lillian Hellman. Ephron says in her essay “Journalism: A Love Story”: “It was a given in those days that if you were a woman and you wanted to do certain things, you were going to be the exception to the rule,” and I like that she was one of those exceptions and that each of these exceptions tipped things in a way to make it possible to be a woman in journalism and not be an exception.

But she also writes easy. She writes short essays on her bald spot and forgetting names and online Scrabble. They’re pleasant, but not very insightful. And in the case of online Scrabble, a little dated. She dances a fine line between charming and the Erma Bombeck-Dave Barry corny zone. I think mostly I’d like to read a Nora Ephron biography.