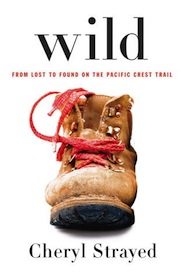 The whole time I was reading Cheryl Strayed’s memoir Wild, about her time spent hiking the Pacific Crest Trail, I was distracted by images of Alexander Supertramp rotting away in an old school bus in who-knows-where Alaska after a lunch made up of poison berries.

That story, Into the Wild by Jon Krakauer, has something similar at its core: This impulse to take life and twist it into something unrecognizable for at least a while, then trying to find a new normal with a new set of folds and creases in the soul.

Of course Alexander Supertramp’s (real name Christopher McCandless) story isn’t written by Alexander Supertramp — he died and someone else cobbled together the stories of hitchhiking and burning all of the money in his wallet and the deep waters and lack of food and I think I remember a busted ankle. Cheryl Strayed wrote her own book, so readers know right away that she at least escapes the hundreds of miles of trail along the West Coast, multi-month soul recalibration. Who knows: She might be short an appendage or two, but at least has the ability to find a way to get words from her head and onto a page.

There were times while reading Into the Wild that I believed Alexander Supertramp wouldn’t die this time. That this kid with a radical case of wanderlust that finds him in outback Alaska would prevail. That this time someone with a Monster-style pack of delicious and nutritious foods would find him, feed him, carry the bag of bones back to civilization. Right now we could watch YouTube videos of inspirational speeches on college campuses. This infected my read of Wild. I spent a lot of time cursing Strayed for her lack of preparation, for her oversized pack, too small boots, lack of water, and insufficient amount of cash. It’s not like Strayed has written the story of her mid-1990s trip as a “Hey Kids! Let’s all go hike the PCT!” brochure. She knows she should have read the instruction manual for her new compass on the flight between Minnesota and Mile Zero.

Strayed’s story starts after her mother dies of cancer, her family dissolves into strangers doing strange things, her marriage ends over her infidelities and she picks up a few months worth of a drug-thing while spending time with a drug guy. She needs something to whip her off this magical ride and the guide to the Pacific Crest Trail catches her eye while she’s buying a shovel at REI. She says goodbye to her mother’s grave, she quits her job waitressing in Minneapolis, she buys herself a bunch of hiking gear, and she sets out to hike part of this route that spans from Mexico to Canada — even arranges to have boxes of extra supplies mailed to small town post offices along the way.

Along the way she has the to-be-expected trail issues ranging from wild animals and rattlesnakes, toenails that blacken and pop off her mangled feet, a water disaster, cathartic moments at scenic vistas, new friends and a 24-hour date in Oregon that puts her new black bra to good use. She sinks backward into the messy stories that have led to this trail at this time.

Of course, when it all ends you’re a little winded, and any kind of frustration with Strayed has turned into a kind of delight matched with the kind of relief you wish you’d gotten to feel for the kid in Jon Krakauer’s story.