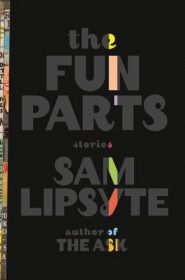 I’m testing a theory that where you fall on the Lipsyte-ometer can be determined by what this passage does to the reading parts of your brain — specifically the last sentence:

“Ypsilanti was easy to leave. I wasn’t from there. I’d just landed there. The Michigan Eviscerations had begun in Manhattan. Martha was a junior at NYU, heiress to a fuel-injection fortune. I was a cheeky barista who kept penciling my phone number on her latte’s heat sleeve. Cheeky and, I should add, quite hairy. Martha finally dialed the smudged figures on the corrugated cuff, cavorted in my belly fur.”

I’ll share mine: I read it once and made a cockeyed wince-face. I read it again and fell right into the crevice between “too clever” and “HA!” This chunk comes early in one of the many whoa-wait-what short stories in Sam Lipsyte’s collection The Fun Parts. In this story a barista has lucked into the kind of marriage where he has the financial freedom to pick a hobby and devote his life to it. (He chooses meat smoking). When his wife falls for another man, he takes up a casual fling with her mother until he is called back to New York City to spend time with a terminally ill friend who isn’t actually terminally ill but wants to finish something that started at a party decades ago.

Let me kill the suspense before I even build it: He does the same thing with short stories. He doesn’t complete the same trajectory within each story (that would be a nightmare times 13), but the collection does build to an absurd frenzy and by the end you might want to bounce-pass the book out of your line of vision. But, again, he knows how to tip the scale in favor of favorable.

There are times when I read short stories and think: Geez, Molly. If I wanted to know this story, I’d follow a car home from the grocery store, sneak into the house through the attached garage, and affix spy equipment to the most vanilla of dream journals. Other times I think: I don’t know, Miranda. You want me to believe this character is teaching dry land swimming lessons in her living room? I’d rather take my chances with a talking cat.

Somewhere in between there are short stories by writers who know that limits are self-imposed. If you want to make a world where something wonky happens and the earth’s rotation takes just a wee bit longer every day, do it. Lipsyte is one of these writers, minus the sci/fi premise.

He doesn’t write nice stories that you read in front of the hearth every Christmas. He doesn’t write characters that remind you of your uncle. He doesn’t write scenes that take an obvious route from Point A to B. In fact, B isn’t even on the map. At his most conventional, Lipsyte writes about a poet who moonlights at a nursery school and is beloved by the young daughter of a rich elderly man. “The Climber Room” ends with whatever is on the B-side of Romance.

“The Dungeon Master” considers the RPG scene and the rumored sociopath controlling the neighborhood game. In “Deniers,” a cardio ballet teacher’s ailing father is a Holocaust survivor and the man in hot pants pursuit of her is a reformed white supremacist. In “The Wisdom of the Doulas,” a male doula is the last-ditch doula for a couple. He’s unconventional, but he’ll clear that clogged milk duct regardless of if the mister is speed dialing 911. “The Worm in Philly” recounts a junky’s big idea to write a children’s book about an old, inspirational boxer. In “Ode to Oldcorn,” high school shot putters learn the legacy of the greatest putter of all time.

The coolest construct is in “The Republic of Empathy,” which leans absurd, but also has some interesting perspective shifts that make for something almost theatrical.

You get the feeling that Lipsyte is always having fun when he writes. By the time he pushes aside his keyboard, he’s got a lampshade on his head. It’s admittedly very fun to watch someone have so much fun, but it also gets to be a bit much. I wonder if he’d be better in smaller doses. A story a day for two weeks or something.