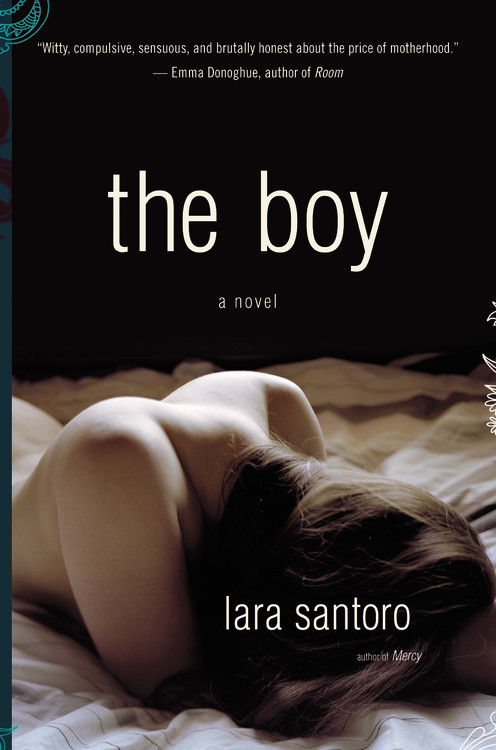 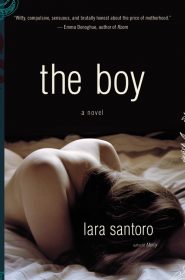 New favorite thing: Wake up on a day with a windchill in the negatives, don fleece leisure wear, peek out the window while bagel toasts, and say to self “Today I will read a book in its entirety.”

Clomp in knee-high boot slippers back upstairs to the bedroom, turn it to a radio station where the only lyrics you might hear will be sung in Italian by people with exquisite diaphragm control, slip between so-soft sheets purchased at awesome kiosk during the holiday season, fire up Kindle app on iPad, and have a-go at Lara Santoro’s slight, delicious, naughty novel The Boy.

(Two cats in a single ball at your feet: optional).

How it goes: Anna is a 40-something single mother and problem drinker at a party at her neighbor’s house when she gets the hard sell from the host’s 20-year-old son, a kid who has recently dropped out of college because he doesn’t see a need for it.

“We’re running out of potable water,” he gives as his reason.

The kid’s throwing lines, eyes, and vibes at her in an unsettling way and it’s all got her a bit frothy. Though she leaves the party without giving into his raw appeal, she continues to think about him, tell her analyst about him, complain to her friends about him. And, dude. He knows he’s in. He rides his dirt bike past her house shirtless and damn near puts her in a coma.

Things are a bit unsettled at her New Mexico home. Anna has an 8-year-old daughter, Eva, who is the resident caretaker. The two escaped Anna’s cheating husband in London and set up a new life on a new continent. There is a housekeeper/nanny who is obsessed with the bleaches and disinfectants she sees advertised on The Cleaning Channel. Nanny also has perma-red eyes and a problem that regularly finds her parked in front of a slot machine with a case of beer at the quick.

This thing with the kid is getting out of control. Anna is busted making out with him at a party and things intensify from there. When Eva goes to London to spend the summer with her father, the kid brings his spare change, baseball caps, and electronics into the house for an extended, lusty stay — that quickly goes from hot-to-maternal after a single argument about the dishes.

Listen. Readers won’t like Anna. She’s an addict and she acts like an addict, unwilling to consider maybe not engaging in a lip lock with the kid. She is 100 percent feed-the-crave at any cost. She doesn’t even know herself as well as the reader knows her. Her past with Eva has a few suspicious years of neglect, followed by resentment. The fights she has with her daughter sound like the fights she should be having in the mirror.

But this story is really well done. It’s a bullet train to disaster with a handful of characters with convoluted motives and interesting ticks. Anna’s friends — one she is always running into at the grocery store, the other is just a voice attached to an answering machine — are a nice touch that avoids getting over played.

The Boy is a delicious way to spend four hours.