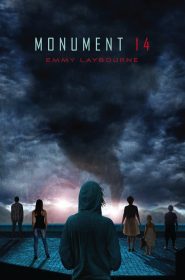 Everyone knows the best place set up shop in the case of a meteorological disaster — or any kind of disaster — is at a mall or superstore. A place with fresh produce, clothing, a pharmacy, board games, and pizza ovens. A place with a massive metal gate to keep the crazed out and the confused teens and their Grade K charges inside.

The crew at the center of newbie novelist Emmy Laybourne’s Monument 14 lucks into this scenario when a massive tsunami results in an epic hail storm that not only ruins the roof of the school bus, but also critically dents the melon of a character or two. About fourteen kids are saved by a skilled driver who Keanu Reeveses the bus straight through the front glass of something akin to a Super Target. The driver performs triage duty on the survivors as they crowd into a pizza restaurant before store hours, tells them to sit tight, then sets out into the chaos to find help. After she leaves, a massive steel gate drops in the store’s entry. It’s a preventative measure to lock out looters in these types of situations.

It’s a “Breakfast Club” collection of kids in lockdown in this story, set about a decade in the future. Narrator Dean is unpopular and lanky. He likes to use writing implements to scribble in longhand on paper-paper, which is good because the whole Network is down and everyone is confused and punching fruitlessly at the power button on their tabs. Dean’s younger brother Alex, a tech whiz, is also safe. There is Niko, a strong and quiet Boy Scout; Jake, a total looker and star football player; and Braydon, a popular follower without a conscience. There is Josie, who hasn’t said a word since the accident and Astrid the sexy senior Dean has been in love with for. evs.

Then there are two handfuls of young kids ranging in age from kindergarten to junior high, including a blossoming sexpot, a brother and sister, a young Hispanic kid and — in a strange fit of comic relief — a young boy who dishes bits of his unconventional upbringing without realizing that not every kid has access to his uncle’s strip club.

The story follows about eleven days in the kid;s lives, during which they will encounter another super serious disaster, stage a mini production of Lord of the Flies, establish a somewhat functional society, and have to make some tough choices about how to respond to external forces.

I guess if Emmy Laybourne were sitting on my couch right now, I’d ask why she chose to have Dean the Dud tell this story. He’s not quirky enough to be some sort of underdog-turned-hero and he is a follower who becomes a chef slash babysitter by necessity. A better pick would be Niko, who has also avoided popularity, but at least stands a chance of getting laid during apocalyptic conditions. Laybourne also shifts her characters into startlingly 1950s gender roles. Both high school girls are smart, capable, and good leaders. Both end up in maternal roles; Neither ends up on the leadership ballot and all the heavy lifting is done by the dudes. Also, the pacing seemed off. Like the characters resigned themselves to this fate far too quickly and forged a mini rebellion in a way that seemed to deviate from the way this would naturally unfold.

So this whole thing is okay. It kept me interested while I was reading it, but I doubt it will stick to my ribs. There are some nice surprises, especially in the end, and an innovative approach to dividing which characters go all caged beast when they’re exposed to the elements. There’s just not enough that sets this story apart from the kajillion other pieces of YA dystopian fiction. In fact, it sort of feels like a quilt of all that has come before it. And, unfortunately, it’s part of a series. I didn’t know that when I picked it up. Of course, my boyfriend hypothesized, from now on all YA fiction will be part of a series. Ugh.