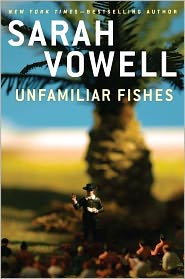 On the first day of my eleventh-grade history class, my teacher told us we wouldn’t be learning about wars and kings. Instead, we’d be studying art movements, political trends, epidemics, religious tumult, and other agents of social change. His theory was that history should be viewed holistically, not just as a chain of big-time events.

What I liked about that class is that learning about those things gave me a sense of the bigger picture. In Unfamiliar Fishes, her examination of the American conquest of Hawaii, Sarah Vowell takes a similar approach, but somehow does not end up offering up enough of something larger. It’s like she’s got the small, bright pieces, but not the final mosaic.

One of the things I liked most about Unfamiliar Fishes was Vowell’s unbridled curiosity. There is very little that does not interest her, and it shows in how she tumbles from one topic to the next at breakneck speed, affording momentous battles and housewives’ diary entries the same wide-eyed wonder.

But for me, that sense that everything is as important as everything else made it difficult to gauge the noteworthiness of anything. It didn’t help that Vowell is very scattershot in her storytelling. On one page, she discusses the crops grown in Hawaii and literally on the next, she has gone back in time 40 years and is holding forth on missionaries in New England. Yes, these things are connected, but oh how loose those connections can seem when presented in such a tilt-a-whirl fashion.

It could be argued that an era like the American colonization of Hawaii should be told in a patchwork fashion because. After all, it did not proceed in a smooth and linear fashion. I think that is true, but I also think when tacking subjects like this, it is an authors’ job to exercise a little more judgment and tease a clear narrative out of the assorted jumble of historical events.