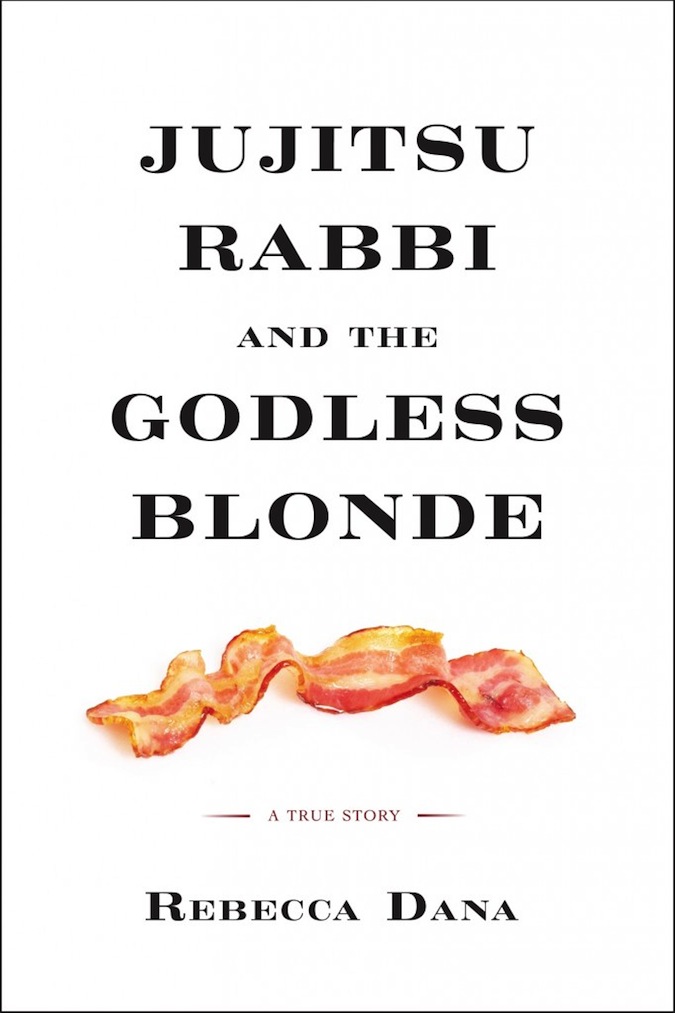 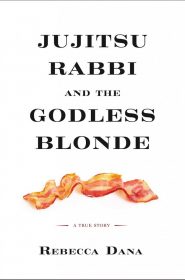 Whenever I read a memoir by a writer who is unknown to me (and not a freshly rehabilitated drug addict — strangers I will blindly read), it always inspires a variation of the same fan fiction about how this book came to be.

In the case of Rebecca Dana’s Jujitsu Rabbi and the Godless Blonde it goes like this:

Characters: Would-be memoirist standing at a table covered in top shelf booze surrounded by a gaggle of tipsy friends and acquaintances on tippier shoes.

Writer: So there I was in my ex-apartment clearing out my stuff before the asshole returned when SHE (points dramatically with thumb to best bud) shows me a hair clip that was on the nightstand that doesn’t belong to me, obvi (points with pointer finger to tightly cropped hair).

Acquaintance: Oh no he didn’t.

Writer: (Nodding slowly) So I take the stuffed Eeyore he got me when I was in the hospital and spike it like a football. Then I stab it over and over again with the heel of my Louboutins. All the while it’s like croaking the song “Blue Christmas.”

(Everyone erupts with laughter)

Acquaintance: That. Is. Hilar.

Best Bud: True story. I was there. (Performs a dying robot dance move to the song “Blue Christmas”)

Second best bud: Only Rebecca. I keep telling her she’s HAS to write a book. She’s got so many stories!

Writer: (Smiles and nods) I really should. No one would believe it wasn’t fiction.

Best Bud: Oh! Oh! Tell them about the time you moved to Crown Heights and lived with the rabbi.

Dana’s story covers a year in her life when she went from the blissfully unaware half of doomed, albeit perfect-seeming couple, into hiding in the Brooklyn neighborhood with a large population of Hasidic Jews — including, kind of, her roommate Cosmo, a Jewish scholar who is quickly losing his religion.

While in Crown Heights, the pop culture/fashion writer for Daily Beast by day becomes an embedded journalist by night, examining the religion she’s been a bit half-assed about in the past. Along the way are little mini-episodes about life at her Skittles-colored office, drugs with strangers at the Boom Boom Room, fashion week, and running with Tina Brown’s crew (and sharing a table with Candace Bushnell).

This is a strange, strange little book. It starts out like well-written chick lit: gushy love that ends as just another public breakup on a Manhattan street. When she moves to Crown Heights it turns to first-person journalism as she describes the difference between her work and social life and Shabbat dinners with orthodox neighbors. As it goes on, it becomes a list of sexy events attended and who was there and who Tweeted what about a 13-year-old fashionista. There are trips to Los Angeles and New Orleans.

It’s all billed as “Let me tell you about the whacky roommate I had” — and he does truly have a unique history and some quality one liners — but Cosmo doesn’t have nearly the screen time the title suggests.

I wanted more smart, well-written Dana, earning easy access into people’s lives and writing about an unfamiliar culture and making a joke by quoting Philip Larkin. She’s a great magazine-style reporter with an eye for detail and context. But so much of this is Carrie Bradshawed down: Partying with models and referring to Tina Brown as just “Tina.” The latter feels like a shiny lure for people who might be put off if forced to read about self-discovery among the deeply religious instead of self-discovery from inside a rack of this season’s Marc Jacobs. And the name dropping comes across as a sort of on-going plea for street cred when her writing really speaks for itself.

I’m dissing this harder than I mean to. Jujitsu Rabbi and the Godless Blonde is a good book, it just feels a little disjointed. I kept wondering why I was reading about her life and wishing I was reading something she had written about someone else’s life.

Also: I wonder when women will stop considering Carrie Bradshaw a spirit animal.