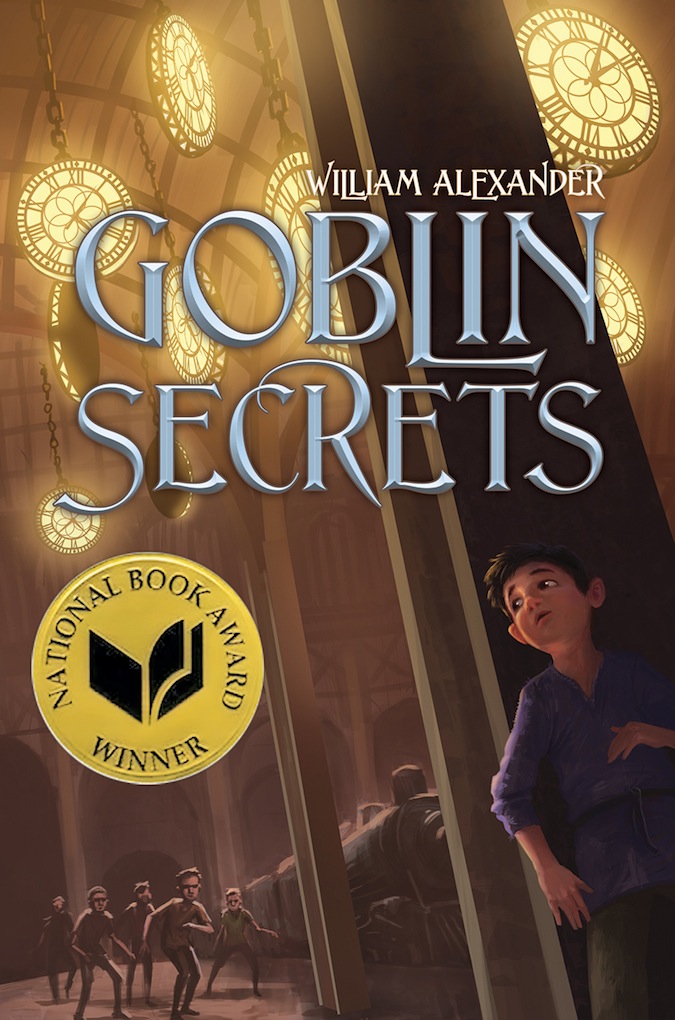 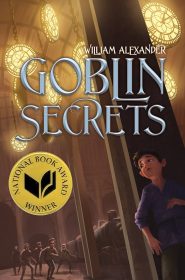 At the 2012 National Book Awards ceremony, when the Young People’s Literature winner was announced I thought, “Goblin Secrets, wha..?”

I was shocked because Goblin Secrets is a fantasy novel up against books about drug addiction, child soldiers, endangered species, and the story of the atomic bomb. Fantasy novels are nominated for the National Book Award, but they don’t often come away with the top prize. I’d much rather read about goblins than child soldiers, so I was excited and had to read it.

Goblin Secrets takes place in Zombay, a city separated by a river and the Fiddleway Bridge. North of the river is the neat, structured, rich sector of the city, while south of the river has meandering, twisted streets, poverty, and a witch, Graba, who pretty much rules all. Graba also takes care of Zombay orphans, which is where we meet Rownie, an orphan whose older brother recently disappeared.

Rownie, like other orphans, goes on errands for Graba, but one day he disobeys her and sneaks into a goblin play. Theater in Zombay is outlawed and the mayor and his guards strictly enforce this law, but goblins are not citizens of Zombay so for some reason they are exempt. Rownie is captivated by their theater, but his troubles start when he is called up on stage. He soon becomes chased by the mayor, Graba, and the goblins, all while still trying to find his brother.

Goblin Secrets is a pretty ambitious novel with great details like Graba’s house that moves, the guard captain’s creepy, clockwork eyes, the sentiments behind each of the masks in goblin plays, and coal created from the hearts of animals, humans included. This detail is rich and imaginative, though I feel like some of it bogged down the story, along with some of the quirks in the plot.

For instance, clockwork and automatons play a powerful role in that the guard captain’s eyes are clockwork, his guards have clockwork legs, Graba’s legs are clockwork, and automatons are powered by the coal that is created from the hearts of beings. It felt a little steampunkish, but with goblins and magic it also felt like it didn’t quite fit. Why would a witch need an orphan to wind her clockwork legs when she has magic so powerful she can control legions of beings at once?

I also wondered about Rownie’s search for his older brother. It seemed like his brother had been missing for months, though I don’t believe the time frame is listed, but Rownie never searched for him until he met up with the goblins. I wasn’t quite sure why it would take him months to go to the last place his brother was seen. Wouldn’t that have happened a long time ago?

I think this is a hard novel to talk about because I can’t quite put my finger on why I didn’t love it, because I really like a lot of things about it. I like Rownie and the goblins, but I’m not so clear on why the goblins are more hated than Graba or how one actually becomes a goblin. And I love that there is magic in Zombay, but magic seems to be overshadowed by automatons when it seems like it should be the other way around. With everything I love, there are so many questions I have, which is what’s turning me into a frustrated reader.

I didn’t hate Goblin Secrets, but I’m not in love with it. The writing is quite lovely, so it’s not that there isn’t beautiful prose here. Maybe the second book in the series will answer some of my questions and make me more energized than I am after reading this one.