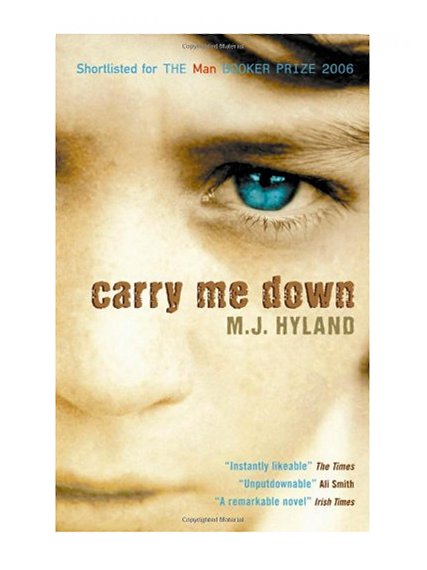 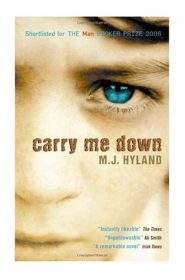 John Egan is a man-sized, child-aged lie detector and has been sending letters to the folks at Guinness Books to share his special skill. He most often gets to test his ability on his moody, big talk-little action father, whose lies end with John Egan getting physically ill. This self-ascribed specialness is John’s single safety pocket in a world where he struggles to find common ground with his father, has a borderline creepy relationship with his mother and his classmates know him as the freak who unleashed his bladder all over his shoes.

MJ Hyland’s novel Carry Me Down is this awesomely uncomfortable and bleak story of John’s life as his brand of peculiarities are about to shift from slightly-strange child to full fledged whack adolescent. And, if the book were about 120 pages longer, I think we’d see even deeper shades of grey that roll over Hyland’s super fascinating imagination.

When the story starts, the family — John’s puppeteer and pun-fun mom, his unemployed father who is always on the cusp of something, and John — are living with his grandmother in Gorey. John has one friend, a fickle kid he has some sexual tingles toward, and his Guinness Books. He studies the art of lie detection, for which he believes he has a knack, and keeps a secret notebook filled with what he has learned and lies he has spotted. He calls this the “Gol of Seil” and he keeps it under his mattress next to some cash he stole from his grandmother after she won at the track.

After the public urination incident happens at school, a faux pax he explains away as an attempt to set a urine-holding record, he becomes a target for taunts among his classmates. No matter. Things are about to shift at home and his mom and dad quickly pack up and make for a different city and a different life. They end up in a low-income high rise where the elevator smells like piss and teen-aged thugs make John’s life miserable. Meanwhile, he’s not crazy about the way his mother’s once dynamic personality is shifting into something dull or the way his father seems to be spending time with the suspect ladies in the apartment upstairs.

And then, very suddenly, something not unexpected but still super strange happens that changes everything.

Gah. MJ Hyland is so good at what she does. She takes the simple language of a pre-teen and creates a subtle something that makes things really, really uncomfortable — one of my favorite traits in a writer. I’m totally digging this writer.