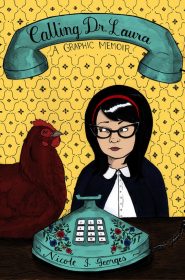 It’s a psychic who tells Nicole Georges that everything her mother has told her about her father is wrong: He didn’t die when she was a child, he’s definitely still alive. Although the seer fails to recognize that Georges is a lesbian and also throws in some man-of-her-dream predictions in the graphic memoir Calling Dr. Laura.” So.

Georges sits on the daddy-update for about a year, letting it roll around in her brain and finally trotting it out in an intimate moment with a wouldbe girlfriend. She’s been told by her family, a rumor instigated by her mother, that her father was a charming con man who stole jewelry and robbed places and that he died of colon cancer at a young age.

Georges gets into a relationship with a musician, Radar. They have loads of pets between them. Georges reflects on the ever-changing leading men who have come into her mother’s life, including foreign royalty, abusive chain smokers, and the Catholic curious. Eventually her half-sister Liz, who is more than a decade older than Georges, gives her some news that syncs up with the psychic’s: Srsly. Her father didn’t die of colon cancer when she was little.

Georges struggles with how to process this information and how to confront her mother — when she’s keeping her own secret, news that, historically, has not been gladly received by the woman. Only one person can possible have the answer: Conservative radio talk-show host Dr. Laura, who Georges unironically enjoys listening to while driving or sewing.

This is a quick-hit, cutely told story with plenty dark material, the equivalent of a picture of an adorable pink rabbit holding a filet knife drenched in blood behind behind her back. For instance: She’s raised as an only child in cahoots with her mother to stay home sick from school and to mask the turds that she releases directly into her underwear. Meanwhile she clings to a stuffed toy she’s named for her step-father, the man who is beating her mother.

In a lot of ways this is just a single, interesting story, the one it seems like Georges would tell around a dinner table. She simply talks about the year-ish that X happened and includes some of the other stuff that was going on to put it into context. Some of the side plots are blurred in the process: Why the chickens? How did Radar go from Big Love to I’m Outtie? Your band was featured in a magazine? When the stories main truths are revealed (Yes, I lied about your dad vs. Yes, I’m a lesbian) the story ends abruptly, save for an epilogue that provides a little closure, but still feels sudden.

Regardless, Georges is a likeable character with a cute retro hipster style to her life and art. Her world is an interesting place to spend two hours.