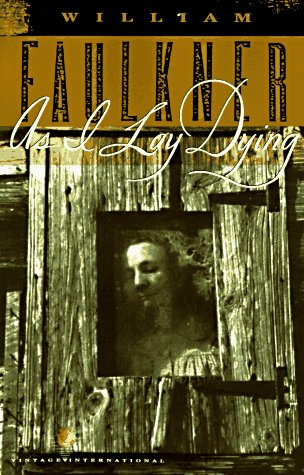 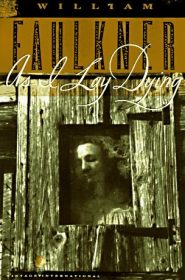 It regularly happens that I’m watching a TV show with teenaged protagonists and there is a scene where one approaches the other in, like, the cafeteria or something. The approachee shuts the book she’s reading — probably for AP English — and I pause TiVo and squint at the cover.

Most recently: As I Lay Dying by William Faulkner, which was being read by the character Daphne Vasquez on the pretty likeable ABC Family TV show “Switched at Birth.” These scenes always make me feel like I had a subpar English experience in high school. I can’t remember what we did read, but we didn’t read Faulkner. So over the years I’ve been forced to form an uninformed opinion on this writer and it looks something like this: Long abstract sentences read by this guy I used to know, a heavy drinker who once stood on a swiveling bar stool and attempted Karate Kid’s signature move before taking a digger into a pile of pull tabs. He had been reading the book at the bar before we got there and now it was sitting on top of a leather-bound journal, where he scratched poems when his blood alcohol level hit a fever pitch.

Word on the streets is that if you’re going to enter Faulkner’s world, this book is the equivalent of a hole in the fence. Although, in sticking with that metaphor, I wouldn’t exactly say this point of entry is without its exposed rusted nails and thistle plots.

The gist: When the story starts, Addie Bunderen is on her deathbed and from where she is propped on her pillows she can see her oldest son Cash, a limping perfectionist, taking great pains to craft her a coffin. Her daughter Dewey Dell, who is secretly pregnant, is fanning her and the neighbors, a higher grade of religious, are tending to her comfort. She dies while her sons Darl, treated cautiously by neighbors, and Jewel, who actually has a different father than the rest of the kids, run an errand that ultimately delays Addie’s death-bed wish to be buried with her kin in Jefferson and leads to the sort of uncomfortable complications that Faulkner seems to delight in.

For instance: There will be an unsuccessful fording of a river that will kill two mules; There will be a skeezy scenario with a shopkeeper; There will be anger-inducing moments starring Pa Bunderen and you’ll want to kick him in the place where he wants his false teeth to go and, finally, there will be the smell of a dead body that desperately needs to be buried.

And it is all very, very delicious. Each chapter is told from different viewpoints — family members and the people they encounter — and each voice tells the story in a way that assumes you know what is going on, leaving tons of negative space to wade through for clues. For instance, yes: What Dewey Dell said and does not say equals the fact that while out working in the field, she did bang the neighbor boy Lafe. And, yes, that fire was set on purpose.

I’ve never claimed to be a great decoder of text, which is why as I read I consulted various high school-cheat sites to compare what I thought I had read to what I had actually read. (I should probably give myself more credit. I did better than I thought I did. Part of it was just understanding that, yes, Faulkner would go places that maybe other writers would not dare. Once I knew that, I was able to cackle my way through this story starring some pretty wretched assholes — and the few good characters who are buried beneath the sledge).

All in all: It was a damn good time.