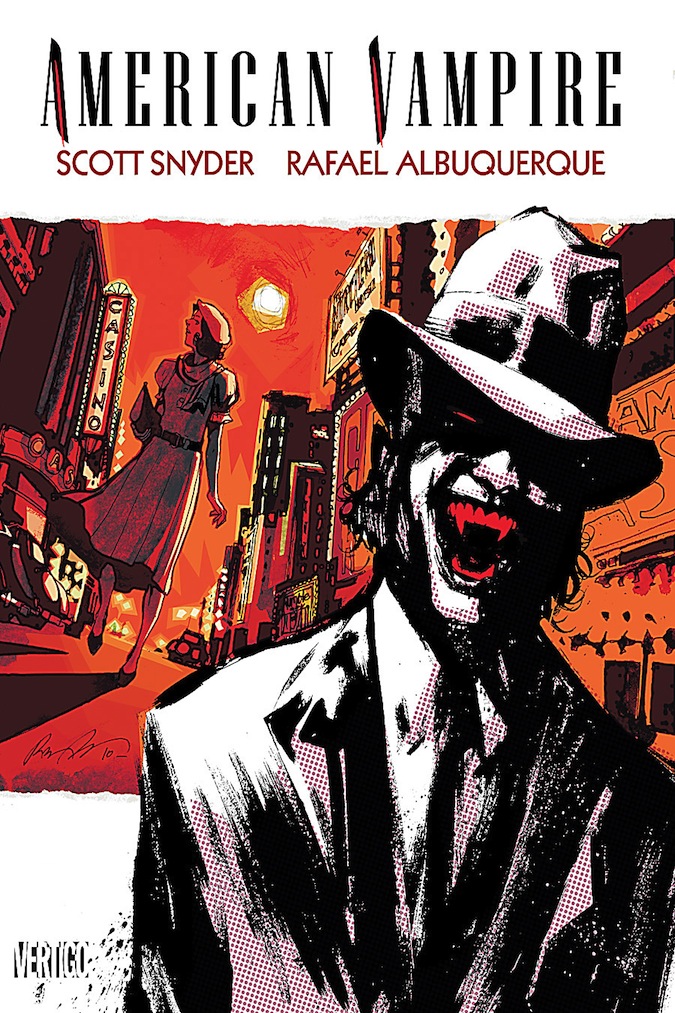 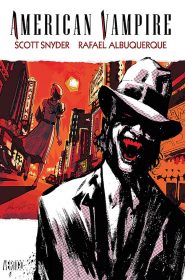 I should’ve paid attention that Stephen King was only involved in the first volume of American Vampire, because Volume 2 is nowhere near as good and I can only think it’s because we get no Stephen King.

In Volume 1, Stephen King wrote the Skinner Sweet part of the story, and it was better than Pearl’s story written by Scott Snyder, though I did enjoy both. In Volume 2, Scott Snyder writes the whole story and something has gone completely off course. The dialogue is cheesy, the character development is weak, and women are portrayed as either naked toys controlled by men or impulsive and screaming.

We begin American Vampire Volume 2 more than a decade after the end of Volume 1. Skinner Sweet is a kingpin in Las Vegas in a casino and brothel. The Hoover Dam is in the process of being built, the town is overtaken with drunken dam workers causing trouble, and someone is killing off the leaders of the dam construction project.

With all the trouble in Las Vegas we’re introduced to a new character, Police Chief Cashel “Cash” McCogan, a man who has just taken over being Chief after his father, the previous Chief, was murdered outside Sweet’s casino. Cash knows Sweet is involved in his father’s death but he can’t figure out how, so right away we know there is going to be good tension between Sweet and Cash.

Pearl enters the story later since she lives far from Sweet. Pearl has been held up in a small community in California with her lover where she abstains from killing humans for their blood. She’s brought back into the vampire community when human visitors from a vampire-killing society knock on her door, asking for help. She and Sweet are a new kind of vampire, one that can survive in the sun, and one that is not killed the same way as old vampires. They want her to tell them her weakness so they can kill Sweet.

I do think this story is interesting. I love the tension with the dam workers and the entrance of casinos. I love the way the story twists multiple times for Cash. I love how evil Skinner Sweet continues to be. What I didn’t love was how this was all pulled together.

I felt here what I often feel in graphic novels – things move too fast, giving no time for the story to flow. Cash finds out that one of the four men leading the construction project is killed and some FBI agents come to help. Instantly another leader is killed, then another, then another. I can tell I’m supposed to get to know the FBI agents during all of this, because they aren’t quite as they appear, but things move so quickly and the dialogue and character development is so bad, that I never really got to know or care about them.

The only person who is developed is Cash. We do get to know him, but I still wanted a little bit more. Give me more tension with him and Sweet. Give me his struggles to please his pregnant wife. Give me more of his grief over his father’s death. He could’ve been even stronger than he is.

I wish the whole book surrounded Cash because by the time we get to Pearl’s story, she bored me. Her relationship is sweet. That’s about it. Sweet. Something does happen in the end which foreshadows that a wrench will be thrown into in her picture perfectness, but I am not all that excited about it.

I’m sad that Volume 2 disappointed me so much. I really loved Volume 1. I was excited for the series. I was ready to tell everyone to check out American Vampire. I’m not so sure I’m ready to praise it anymore. I think I’ll give Volume 3 a chance, but if it doesn’t bring back the magic of Volume 1, I’m done.