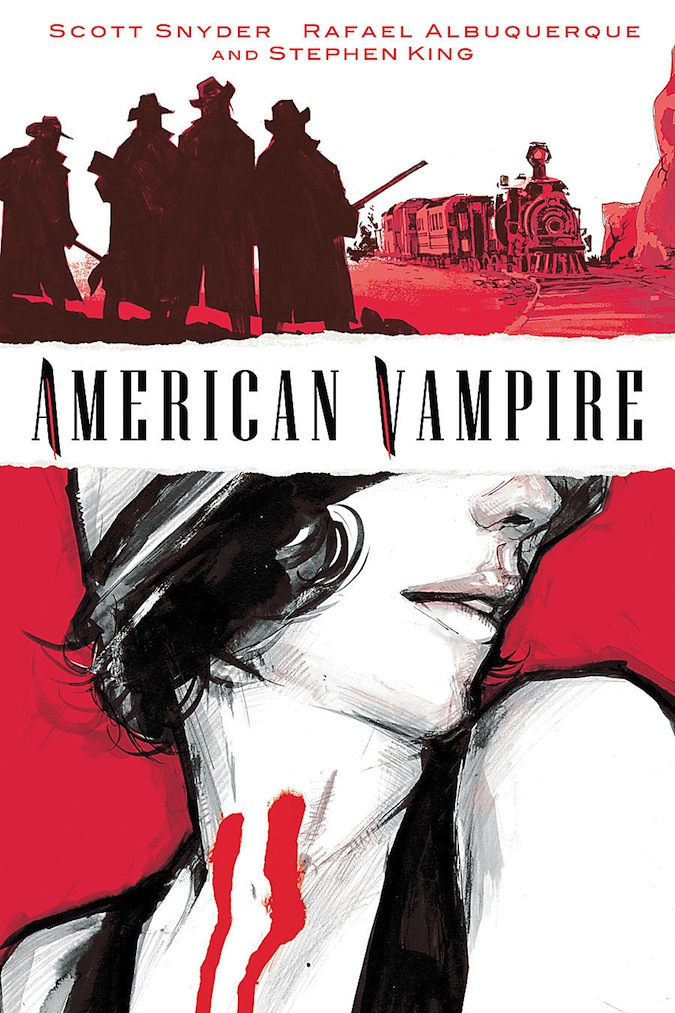 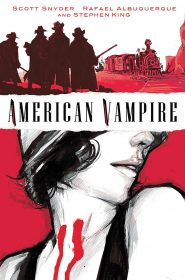 I feel like I need to put Stephen King on the same pedestal where I have Neil Gaiman because I had as much fun reading American Vampire Volume 1 as I did reading Sandman.

American Vampire is a joint effort between Stephen King, author Scott Snyder, and illustrator Rafael Albuquerque, and it’s not full of glittery, gorgeous, lovesick vampires, which Stephen King lets you know when he writes in the introduction:

What should they be?

American Vampire is a tale divided between two stories taking place in alternate chapters, one set in 1925 and the other beginning in the late 1800s.

Pearl is a wannabe actress in 1925 until she is betrayed by a friend and given as a meal to a clan of vampires. They leave her to die, but she wasn’t quite dead. Pearl is saved, if you think being turned into a vampire instead of dying is saved. (I do.)

Skinner Sweet is a gangster, bank robber, leader of thieves in the late 1800s. After being captured he and his captors are on a train that is about to be overturned by Sweet’s gang. Trying to escape in the destruction, Sweet gets into a fight with a vampire and the vamp’s blood mixes with his. You can see where this is going.

Pearl and Sweet are our vampires and they are out for vengeance against those who wronged them, which includes human and vampire alike, but they also have interesting abilities. They can be in the sun unlike their European counterparts.

My biggest complaint with graphic novels is depth. Some of them move too quickly where I don’t learn enough about the characters and don’t care what happens to them. I’m looking at you Walking Dead. (Comic book, not TV show. The TV show is kicking some serious ass in season three.)

In American Vampire, there is no lack of depth. We get into Pearl’s head, feel for her when she’s working three jobs to pay rent, and cheer when she tears the limbs off her betrayer. As for Sweet, his story is longer than Pearl’s so we learn more about him. He’s a cocky, arrogant killer, and he also plays a good psychological game. Long before he was a vampire he could twist things in people’s heads in the creepiest of ways. He’s so wrong, but oh so right.

There are also sub characters that really make this story, my favorite being special agent Jim Book, the man spending his life trying to capture Sweet. Sweet wrongs Book in a disgusting way, but I still found myself cheering for both Sweet and Book. I wanted Book to catch Sweet and I wanted Sweet to get away. This part of the story really is a western, and it reminded me of how I cheered for both captor and crook in “3:10 to Yuma.” American Vampire could’ve just been this story between Sweet and Book and I would’ve been completely satisfied.

But both stories about Sweet and Pearl are great, and are enhanced even more so with the artwork. It’s creeptastic with close ups of shocked eyes, screams, smirks, bloody, dismembered bodies, and some amazing long shots of vampires in flight, jumping on their prey. The artwork really adds so much more terror to the story.

I loved this book. It’s full of sharp writing, flashy, horrific artwork, and I couldn’t put it down. If you’ve been wanting some gritty, twisted, bloodsucking horror, this is exactly what you’ll find in American Vampire. I can’t wait to see what happens next.