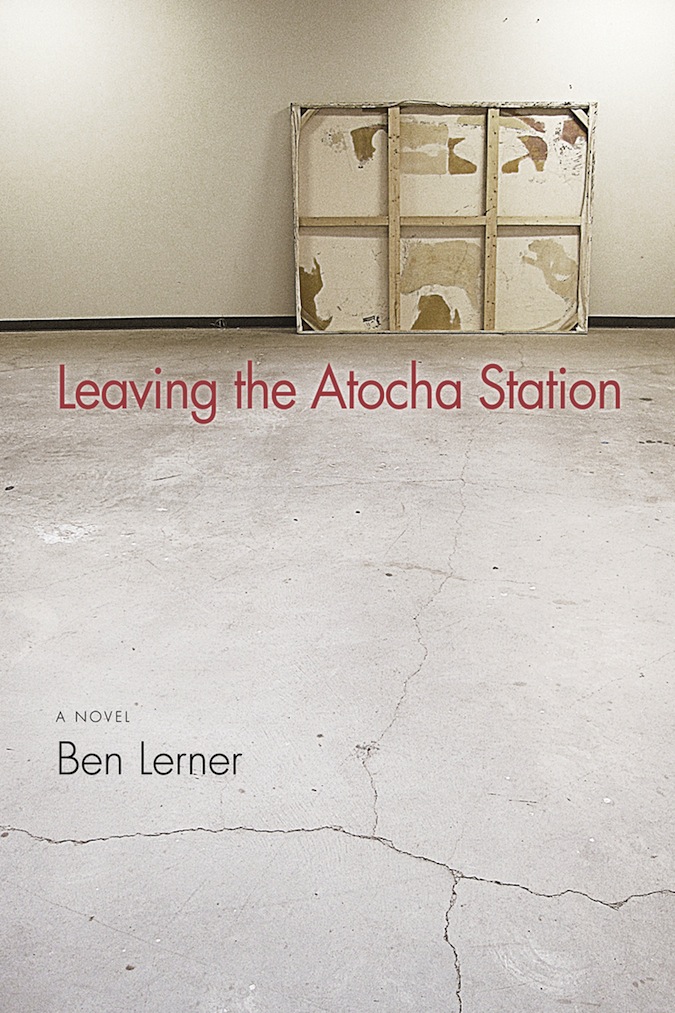 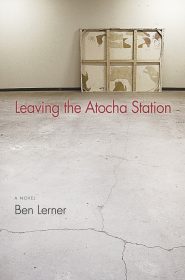 Adam Gordon is a poet who seems to hate poetry. He’s gotten himself a pretty sweet fellowship, a year-long stay in Spain with a project, that, when explained, rings sort of false. He’s got a flexible relationship with truth and suffers no shame for wiping spit under his eyes and pretending his mother has died to gain sympathy. There is no crisis of conscience when he takes a tragic story his friend tells and makes it his own meaningful tale. He’s also got a steady diet of white pills and spliffs and a fascination with what he looks like when he a) makes this face; b) scribbles in his notebook; c) is viewed from an airplane.

Man. The protagonist of Ben Lerner’s debut novel Leaving the Atocha Station is a serious weasel. Or, maybe he isn’t. Maybe he is just like everyone who regularly looks around, adjusts his underwear, and wonders how the hell he has gotten away with this whole I’m-an-adult-and- people-assume-I-know-what-I’m-doing thing. Maybe he just seems like someone I would have accidentally dated in college because we, as a reader, have access to what he internalizes. Maybe he’s only a fraction of the asshole he thinks he is, the amount that is visible from the outside.

When the story opens, Adam is in the early part of his daily routine. Except, when he gets to the museum to stare at the same old same old piece of art, someone has beat him to the room. It’s a man and he’s weeping. He pulls himself together. He weeps some more. Our poet friend watches him and wonders if the man is dealing with grief he brought into the museum, or:

“Was he having a profound experience of art?”

While Adam is considering the idea of a profound experience of art, he is also engaged in a serious repertoire in order to feign his own authenticity. He is trying to be a human being in a slightly different way than he is already a human being. He walks with purpose so it seems as though he has somewhere to go. He has a way of arranging his face that indicates a whole litany of meanings ranging from political to contemptuous. While scribbling in a notebook one day he realizes there is no reason to do this. He doesn’t have an audience.

This is how he spends all day every day, with the inclusion of Arturo and Teresa, artsy friends he meets who immediately champion his work as a poet, and Isabel, a love interest who he seems to fall harder for when he realizes he has competition. (What follows is a wince-inducing scene of bad decision-making while he tosses his parents’ credit card at the finer things in life). Meanwhile, he’s also dodging the other members of his class and resenting them when they consider him a Poet with Opinions Worth Listening To.

I absolutely adored this book. Like, the process of reading it is just so lazy and such a pleasure. Almost every page has a dog-earable moment. It’s pretty plot-lite and there aren’t any real violent inhale moments where you worry about the outcome of a certain scene. This is probably because the main character himself has a sort of slow-drawl chill way of meandering from place to place and just finding himself in these situations. And most of his crisis is contained within his own noggin and isn’t the stuff of cliffhangers.

Which brings us to this thing. 1. Ben Lerner’s bio blurb looks like a condensed version of Adam Gordon’s bio. 2. This kind of my-life-as-fiction thing used to annoy me. Then I just didn’t care anymore. That was helped along by reading a collection of work that didn’t differentiate between fact and nonfiction, and me living to tell about it and not having to wipe pieces of brain matter off the pages. So, technically, aside from my love of gossip and intrigue, it doesn’t matter to me whether Ben Lerner and Adam Gordon have similar DNA.

But: 1. Adam Gordon has got a cocky exoskeleton that is protecting self esteem that is the consistency of Jell-O. How ballsy of Lerner to build this sniveling character and then set his own head on top of it. On the other hand, 2. is this the ultimate humble brag? Create a character who has a lot of the same life plot points and make him insecure and a little awful? Then reveal him as an unreliable narrator of his own story? Why, he’s not the Spanish bumbling, half-assed poet he claims to be, he’s held in good regard. He’s selected to be a panelist along with some other biggies in the biz. No, you didn’t fool them, son. You fooled yourself. YOU’RE THAT GOOD.

Whatever. It doesn’t matter. I couldn’t help myself from really liking this book.