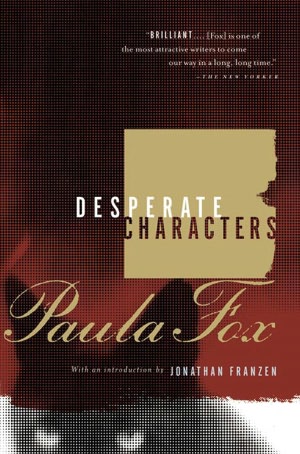 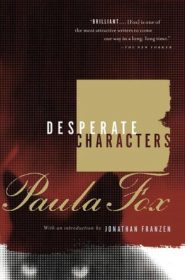 Sophie Bentwood has been feeding a stray, which means that now while dining in their Brooklyn brownstone, in a neighborhood on the cusp of gentrification, she and her husband Otto are under the cat’s observation.

Otto wants to ignore it; Sophie thinks she’ll give the cat a bit of milk and later this weekend, when they go to their house near the Hamptons, their absence will break the cycle of this repeat visitor. While setting out the saucer, the cat bites into her hand and she has to stifle her yelp so Otto doesn’t hear. She doesn’t keep this secret long, though, in Paula Fox’s novel from 1970, Desperate Characters.

Quick curiosity: I’m not sure how this ended up on my to-read list, which is one of the joys of keeping a to-read list. I add to it pretty liberally, basically anything that even kind of interests me so that I’m never caught at a bookstore, library, or faced with the final page of something on my Kindle and stumped by where to go next. So, Desperate Characters ended up on my list. Not knowing how is both a fun mystery that makes me feel like I’m really mixing it up over here and frustration: Now I can’t go back to the source and say “More like this, please.”

Otto is an unyielding, self-righteous lawyer who is breaking up with his longtime partner and friend Charlie whose liberal lean, compared to Otto’s decidedly not liberal lean, has finally become an insurmountable obstacle; Sophie used to work translating French books, but lately she’s stopped. Now she is a bit aimless and isolated, no actual friend-friends, living in a neighborhood where, across the street, a man wakes in the middle of the night and finds it easier to urinate out his window than to use a traditional bathroom. She might go to the store in search of an omelette pan and leave with just an egg timer. Meanwhile, her hand is bleeding and she’s sizzling with the idea that she has perhaps caught rabies.

This shorty follows three days with the Bentwoods, married 15 years and childless, during which the fractures and ties in the couple’s relationship will be revealed in roundabout ways through the events and circumstances that fall in their path. Meanwhile, the hand is swollen and tender to the touch. There is a party at a friend’s house where Sophie’s hand is examined by the host, in his bedroom, while he tries to contact a professional with the ability to advise her what to do. Downstairs, Otto has taken up a strange flirtation with a woman Sophie finds insufferable. Later that night, Otto’s former partner shows up at their home, drunk off his ass and frothy about the goodbye Otto tossed out nonchalantly earlier in the day. Sophie, unable to sleep, steals off into the night with Charlie and spends a few hours with him at a bar. Charlie expresses his hurt feelings; And since they are confiding about Otto, Sophie confesses to an affair she had a few years earlier, but stops short of sharing the details with Charlie. A trip to the summer place will include a random act of vandalism and Sophie will explode all over an old friend. They will also wait to learn the diagnosis of the stray.

Desperate Characters is about a marriage that isn’t necessarily working, but isn’t necessarily not; Sophie’s listlessness and Otto’s cluelessness about what is happening outside of his own world; the fear, and a dash of excitement, at perhaps having rabies and the ensuing shots in the stomach; the way the world might chuck a rock through your window or slice and dice your belongings.

This is the kind of story that oozes with a certain 1970s-ness that I can’t put my finger on but that makes me want to dive deep into a vat of 1970s literature to understand more fully what we wrote like then versus what we write like now. Maybe it’s Sophie’s restlessness mixed with Otto’s oppressive personality, which feels almost quaint in its datedness. She, for instance, gets a small thrill when they go to a French opera which she is able to understand without headphones that deliver the translation. Anyway, this is a nice bit of period realism that plays out with the purposeful stiltedness of a staged production. There are all these pockets of mini stories inside, including an anecdote about a woman who wanted a divorce from her husband, who had suddenly gotten rich by rearranging the keys on typewriters to create nonsense on pages. It became all the rage and the demand exceeded their ability to produce and they’re income increased. He buys nice things, then ruins them so he doesn’t become a slave to them. He has a party and she makes a Jell-O salad filled not with fruit, but with coins.