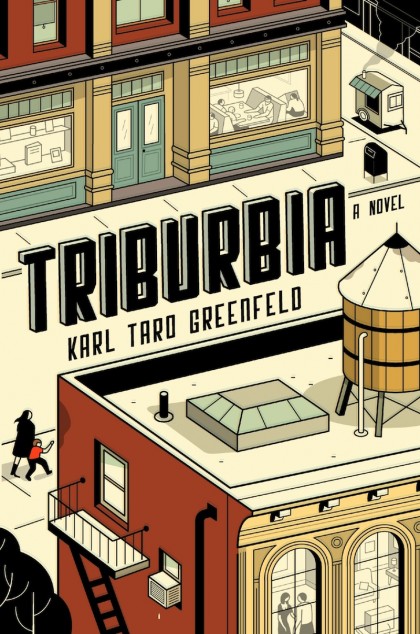 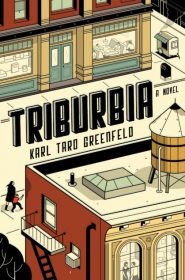 Triburbia was meant to be a palate cleanser. Books, blerg. My attention span was rotting at the edges and I needed something, but the something was undefinable so I didn’t know where to look. Then Amazon recommended Karl Taro Greenfeld’s debut novel and a copy from the library just happened to be on the kitchen table, my boyfriend’s spontaneous nab from a few weeks earlier.

There are few pleasures as great as going into a book cold, save for the plot summary inside the cover. Especially when the story pushes its boot into your chest and is, gulp, good. When you finish the first chapter, look at the cover and think “Can this possibly be?” Read another chapter and admit Greenfeld is really doing a bang-up job here. Although, admittedly, it loses steam at about halfway through. But those first few chapters say: “Hi. I’m Karl Taro Greenfeld. And I’m going to entertain you with my deft storytelling skillz.”

The premise is yeah, yeah, yeah. A bunch of early middle-aged, moderately wealthy creatives, white or white-ish men, who live in the Tribeca neighborhood and regularly meet for breakfast after dropping the kids off at school. They are a sound engineer, a photographer, a guy with mafia connections, a puppeteer turned tinkerer, a hulking sculpture artist, a film producer, a lying memoirist. Greenfeld breaks the novel into a series of connected short stories about the upper middle-class woes of those in artistic fields. The chapters are titled by the street address of the featured character. For the purpose of comparison: As a whole, the effect is closer to — but still doesn’t live in the same zip code as — Jennifer Egan’s A Visit from the Goon Squad than whatever the hell that thing is that Molly Ringwald just lazily dribbled from the side of her mouth and on to a page like someone hopped up on Novacaine.

Dividing the book like this gives Greenfeld the chance to one at a time brandish a magnifying glass at the character. At first it’s like, “Ho-lee, wow. Does this Greenfeld dude know how to spin a yarn.” The first chapter is about Mark, a musician-turned-sound engineer who is married to a stoner and has two daughters — one who is the quintessential mean girl on the playground. Word in the ‘hood is that a local high school student was tailed home from school and molested by a stranger. When the composite sketch circulates, the culprit bears an uncomfortable resemblance to Mark. This is especially humiliating because Mark was spotted on the playground at the school recording ambient playground noise the previous year, so he’s already got some eyes on him. This story is fantastic in the way it looks at parental paranoia, popular hysteria, the refashioning of dreams.

In the second chapter, a photographer with Little’s Disease remembers the year he went from a special needs school to the “regular” high school, where his sister Shannon was this beautiful dynamo who ruled the hallways. He’s quickly absorbed into a clique of unpopular kids with various stages of misfititis, but eventually attracts the attention of an older boy and they forge a friendship over spliffs. Then, duh-duh-dun.

Things are still going strong through the portrait of a former high school athlete-turned artist who is pelvis deep in a woman who looks uncannily like his wife and on to the puppeteer who loathes a popular mainstream puppet master and her dynasty, but can’t resist her funding when she invites him in to her fold to make something artistic and non-mainstream. A mobster can fix almost everything, except the girl who is bullying his daughter and then in the next chapter the bully experiences her own social shun.

After that, things taper. The characters become less distinct and their voices all have the same cadence. The stories aren’t amazing stories anymore, they’re just slices of life that are rather meh. The characters just seemed better defined in the beginning, then it’s like Greenfeld lost control of the story. You start to notice that you’re never going to see some of these characters again, except for in the background of someone else’s chronicle of woe. This is all the more unsatisfying because it had such a great start, such funny and tragic situations.