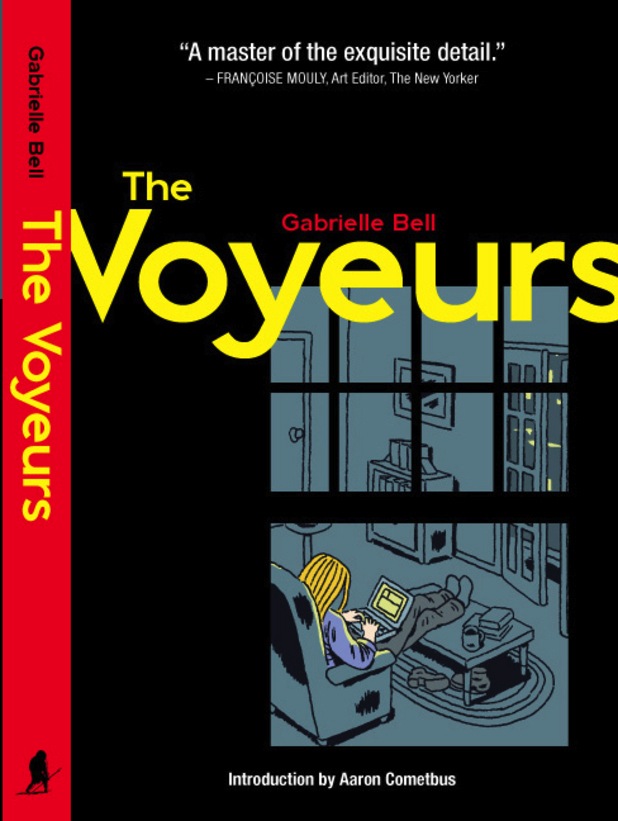 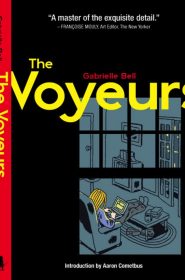 Gabrielle Bell is in Japan with her filmmaker then-boyfriend Michel Gondry, who she is collaborating on a film with, and she has a free day. She skips sightseeing to hang out in the hotel room in her robe and sketch. At one point she darts over to the door to watch Michel through the peephole as he finishes a conversation, then turns to unlock the door. She skitters back to the desk, but is totally busted. He knows that this part social-part loner artist has been peeking.

“Was it obvious?” she asks.
“No, but it’s weird. You should put that in your journal,” he tells her. “You’re not going to, are you?”
“It’s not that interesting. Everyone looks through peepholes,” she says.
“But it’s funny. And honest. You should be honest in your work,” he tells her.

And here it is, part of Bell’s The Voyeurs, a collection of her dear diary-style comics, including some that have appeared on her website and published by Minneapolis-based Uncivilized Books. The whole collection has a sort of through-the-peepholeness, or maybe more like microscope, as Bell creates memoir-like short stories that reveal curiosities about the world and herself. I think I’ve called her this before, but Gabrielle Bell is the the quintessential old-school confessional blogger as cartoonist and her work is generally pieces about things that happen around her in the course of a day — whether real or real at the root then heightened with imaginary, sometimes supernatural, outcomes.

The last thing I read by Bell — aside from what she posts online — was Lucky, which is a meandering trip through Brooklyn, a lot of apartment swapping, odd jobs and misanthropy, done in black and white. It’s good, of course. I consider Gabrielle Bell (such detailed comics with a just-north-of-realism) to be number one of my Big Three, a list that includes Julia Wertz (so g’damn funny) and Vanessa Davis (her images have so much joy).

But this is like a whole new level. It has scenes spanning from 2007 to 2010 and it’s done in full color and it catches her at a time when she’s got name recognition even outside of comic-con. Her impulsive decision to adapt the Scum Manifesto for an anthology becomes fast news that hits plenty of outlets and gets a funny bit in this series. Anyway, at this point in her life, she seems to be doing this full time and well enough to have a long distance relationship on a different coast and the ability to travel to and fro. Of course that makes for more interesting, larger scoped daily musings.

Whether she is asking a computer tech to unhook the internet from her computer so she can hole up more effectively or jumping naked into a river, it has such a realness that is just delicious. At one point she has created a DIY Bakram Studio using blankets and two space heaters, blowing out the electricity in her apartment building. At another point she opens an old sketch book, flips through the pages and weeps that she’s wasted her life.

Fun fact: Part of this book includes a series about Bell’s trip to Minneapolis in October 2009 and includes burgers at Grumpy’s with the owner of Big Brain Comics, hotdish and speaking in front of Zak Sally’s class. (She also dorks out on Lorrie Moore at a book festival).