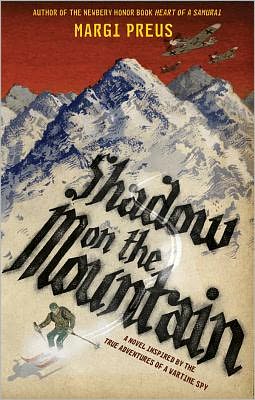 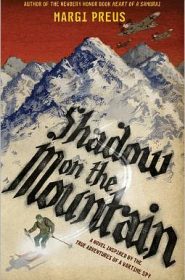 If I had read Margi Preus’s young adult novel Shadow on the Mountain when I was ten, instead of thirty-seven, you would find me right now up to my elbows in homemade newspapers written in invisible ink and a bookshelf filled with my own personal spy journals.

“9.29.12: Dear Spy Journal, Subject has backed his car into his driveway and is now standing at the front window watching me. Wife has just snuck outside in her robe to deposit empty bottles of liquor into the recycling can. Must buy package of fake mustaches.”

Preus’s historical novel-based-on-fact is the story of Espen, a teenaged soccer player living in Norway during the German Occupation. In the first scene he is on an super-secret errand, delivering underground newspapers. He’s intercepted by a car full of German soldiers who reserve the right to question his destination and search his backpack. He constructs a quick lie that corresponds with the jar of jam in his bag, and escapes unscathed with the newspapers still hidden in his wool socks.

Things grow pretty grim in his small town. They are under constant threat of being questioned, searched, imprisoned or killed. Rationing has made food scarce, especially the good stuff. His longtime best friend Kjell seems to be sympathizing with Hitler. So is the team’s most vile bully. Teachers are being arrested and his soccer team is about to become part of a mandatory Nazi sports association. Espen, whose eager to do anything to help his countrymen, and some guys from the soccer team create an underground shelter for covert ops.

He moves up the ranks. He’s got a code name and he’s been running errands. His little sister Ingrid is keeping a journal, although it is against the law, and doing some of her own wheeling and dealing. Her father is monitoring packages through his job at the post office. Espen figures out who he can trust and who is watching him and who he is supposed to hand off information to. He has some close calls and engages in some ski chases. More often than not, he subscribes to the idea of staying in plain sight and playing stupid when he’s questioned.

This story, which is based on the true experiences of Erling Storrusten, is so so so exciting. It’s also an interesting look at the way WWII affected Norway and how it divided even the best of friends. It’s also got a cute little love story, also true, between Espen and the young girl who rebels by wearing a red hat to show her support for her country. There are also good touches of Norwegian folk lore and culture.

While it’s Espen who stars, it’s also got a great character in his sister Ingrid, who shows the importance of recording the events. I wish I had a 10-ish-year-old friend I could pass this book on to.