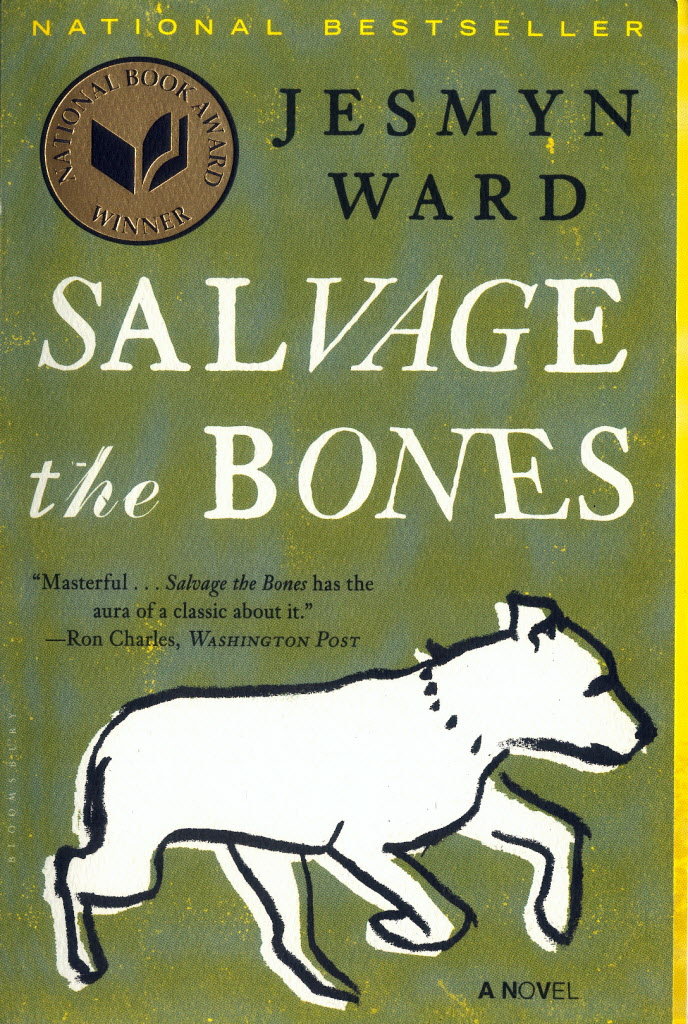 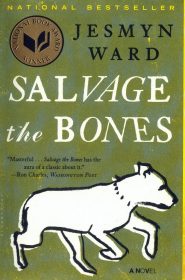 I completely understand why Salvage the Bones by Jesmyn Ward received the National Book Award. It’s a moving and depressing portrait of race, poverty, family, education, and Hurricane Katrina, with a little bit of mythology woven throughout the story.

It takes place in the days leading up to and during Hurricane Katrina. Fourteen-year-old Esch, her brothers, and her father are very poor and live in a rundown house in Mississippi near the Gulf of Mexico. Over the summer, Esch and her family have been hearing about storms getting stronger, and we readers know what’s coming, which made me cringe reading descriptions of their household and the lack of food.

Throughout the summer, Esch has been reading Greek mythology about Medea and this is not by accident. To give a brief (and very poor) overview of Medea, just know that she marries and has two children with Jason, but then his wandering eye pulls him towards a princess and away from Medea. Medea poisons the princess and her father, kills her children, and leaves Jason. Ward weaves the aspects of Medea’s life surrounding betrayal, unrequited love, and motherhood with Esch’s life, especially when she finds herself pregnant by a man who doesn’t love her.

Esch is a fascinating, tragic character, but she hasn’t had the best life so the poor choices she makes seem believable because she is reaching for something. She and her brothers have raised themselves because their alcoholic father is almost always passed out or raging. I wanted Esch’s older brother to be more of a fatherly figure to her, but he’s more wrapped up being a father to his pitbull, China, and her babies. China’s babies are valuable. She is a star in underground dog fights and her babies are bound to be as good as her, thus making them worth a lot of money that the family needs.

The idea of family and motherhood is present with Esch, but also with the pitbull. China is vicious when people come around her puppies, yet when they become ill she is vicious towards them. Esch observes this in interesting ways and with her references to Medea I couldn’t help but think of Medea, Esch, and China when it came to motherhood and family and what it all means.

This was a hard book to read. I constantly wanted to shake Esch and her family to talk some sense into them, not only for the impending doom they would face with Katrina, but of the poor choices they were making. They were more surviving than living, but with poor education and no money, what else could they do? This is a close look at the poverty we saw after Katrina hit where we watched people on their roofs, waving at the helicopters, begging for help. I know so many people speculated, “Why didn’t they leave when the evacuation order came in?” but where would they go with nowhere to turn and no resources?

This is a really wonderful book. I loved the descriptions of the household, the family, China’s babies, and Esch’s life. It’s beautifully, lyrically written, and it really does bring this family, and particularly Esch, to life. This may not be for everyone, but it is destined to be analyzed in college literature classrooms for years to come.