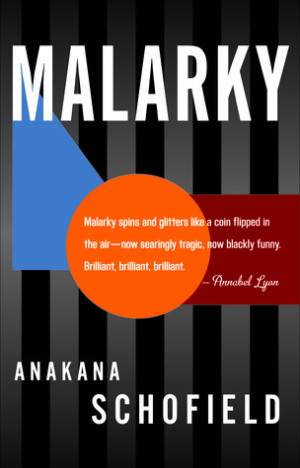 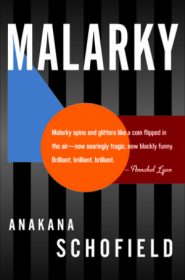 In the first episode, Our Woman is newly widowed and also has a freshly dead son. She’s meeting with a counselor referred to as Grief. She’s having dreams, Our Woman confesses. Naked men having at each other. Grief’s response: Clean the kitchen floor. The next best thing, turn to God.

Ankana Schofield’s debut novel Malarky is told in 20 non-chronological periods in Our Woman’s life. It seems to be a post-complacency awakening toward empathy and a larger world view. She’s living in rural Ireland and married to a chilly, awful, maybe attractive man who counts on her for his creature comforts and the occasional screw. They have three children: Two girls that are barely mentioned and Our Woman’s pride, Jimmy, who she was seen getting all up in a neighbor boy down by the barn. This is not information that is going to sit well with Our Woman’s husband, Himself, and she asks Jimmy to keep it quiet and not be bringing boys around the house.

The realization that he is gay coincides with Our Woman getting intercepted by a woman, Red the Twit, who tells her she was sleeping with Our Woman’s husband but now she’s gone religious. Red wants her to forgive Himself, but Our Woman is more interested in understanding what happened between him and this stranger.

Then everything changes. Our Woman is shaken to life and begins a quest for experiences that match those of her husband and son. She finds a stranger to engage in an awkward one-night stand, considering her husband and Red the Twit and how this bumbly fumbly matches what they have done. She spends time at the library studying places she’s never been — like Syria. She meets a young security guard and begins a slow seduction that will hopefully lead up to recreating the different romantic episodes she has seen Jimmy engaged in.

But before this, Our Woman’s husband has stopped funding Jimmy’s schooling and their son comes home to stay for awhile before jetting off to the United States to join the Army and eventually go to Afghanistan and eventually die.

This is a complicatedly woven story led by an unreliable narrator whose vision of herself doesn’t always sync to the ways others see her — especially her husband and a gaggle of girlfriends — or even the way a reader sees her as the perspective shifts from first to third person and back again. The third-person view of the revelation of her son’s homosexuality is chillier than the the oozing affection she maintains for him in first person. Red the Twit describes her husband in a way that is opposites-ville from the way Our Woman sees him. And the scenes from a hospital are a constant contradiction between what is jotted in her file and how she remembers the events unfolding.

Considering Our Woman spends so much time reeling about confused and sick with grief and mentally clouded, this book is darkly funny. In a scene with the card salesman, her first dalliance with infidelity, she goes back to his room and begins stripping and it all catches him off guard.

“He commented on the remaining bits of clothes on her, that’s a good quality skirt, rather than the body she’d unwrapped. He then remarked, somewhat absently, he’d been thinking of going on a day trip to Wales. Had she ever been to Wales?”

Schofield is one of those writer-writers and colorful sentences that flip from funny to heavy seem to come naturally to her. She’s really captured the layers of a woman who has conflicting emotions about the series of events she’s faced. This puzzle of a plot must have been a bugger to sort through and arrange.