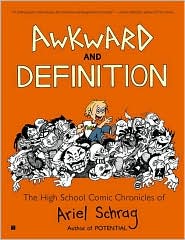 Nothing amps the saturation levels of my vanilla teen years like a coming-of-age collection of comics by someone similarly aged who knew what strawberry bidis were as a ninth grader. Me, age 37, Googling. A: Something to smoke.

Ariel Schrag’s collection Awkward and Definition is the story of her ninth and tenth grade years at Berkeley High School in California. Themes include music, her crushes — both male and female, a rotating cast of friends and makeout partners and the sort of dramatics that occur with teenagers on the loose. This collection is just so cool and her life is this wide-open independent world, light on the fun-suck of supervision. In fact, every time a parent enters a panel I had this “Oh no you’re going to get busted for smoking pot!” panic, obviously some sort of residual fear of authority from my own life, which never came to fruition.

In Awkward, she’s just started at a new school and her current obsessions include the band L7, the actor Juliette Lewis, and her short-lived boyfriend Michael, who voluntarily drinks from a vial of spit in her Juliette Lewis shrine. Her interests are broader sophomore year. In Definition she is quietly identifying as bisexual, she’s obsessed with getting an A in Chemistry. She’s become a huge fan of No Doubt and this guy Leonard is totally into her, she only likes him as a friend with benefits, but when he gets cute after a decent haircut, she isn’t willing to let one of her best friends take him for a spin. She tries on the preppy scene for a single party. She meets Gwen Stefani.

And, sort of meta, she buys her way into a comic book convention where she shows off her work from Awkward and gets some good attention.

I love this collection. Just love it. It’s like bizarro fan fiction of what I would have wanted my teen years to look like if I’d known anything about the world outside of the high school gym. I love her honesty, her bravery at being this honest and her eyes-wide-open approach to life. She’s got this great balance of fun-time girl meets super-smart-and-focused.