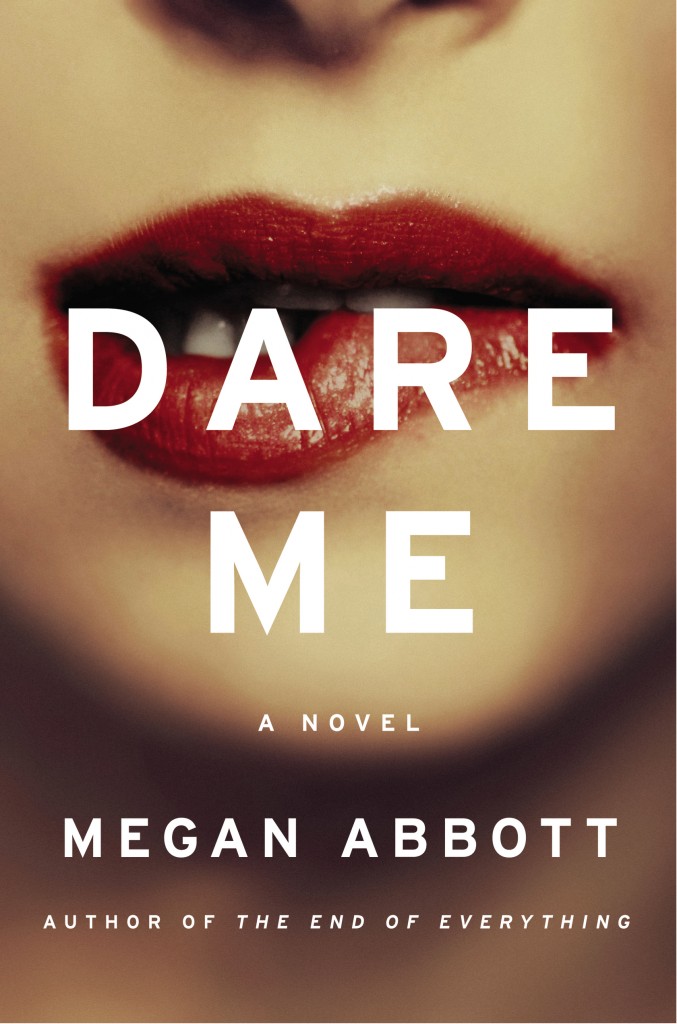 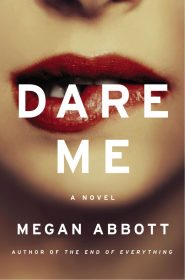 The less you think about Megan Abbott’s Dare Me the more you’ll enjoy it. When you’re knee-deep in cheerleader on cheerleader aggression and glitter and backtucks you’re totally captivated. You will find yourself breathing a little shallower and your brain feeling a little muddled because you feel like you’re subsisting on nothing but adrenaline, hairspray fumes, and green tea.

It’s only when you’ve closed the cover, taken the ride, and your brain begins to engage again that you start to wonder about the plot holes so large you could drive a truck straight through them.

Addy & Beth are BFFs, cheerleaders, and mean girls, though Addy, our narrator, wouldn’t have you think of her as a mean girl. She would, and does, blame all the bad stuff on Beth. Things are going swell for the duo with Beth as Queen Bee and Addy her lieutenant. However, things start to go awry when Addy takes a liking to the new cheerleading coach, Colette.

Colette whips the girls into shape, turning them from a group of loosely joined ass-shakers into a tiny, tough acrobatic competition-ready cheer squad. Along the way she usurps Beth’s role as Queen Bee and becomes the light of the cheerleaders’ eyes. She has a most inappropriate relationship with teens, plying them with white wine and cigarettes, and saves her most egregious boundary-breaking for Addy, involving her in affairs that are much too adult for a girl of sixteen.

The book follows the tug of war between Coach Colette and Beth as they vie for Addy’s trust and loyalty. Addy comes off through much of the book as a hapless pawn though it is eventually revealed that she does has a stake in this game.

Megan Abbott has nailed the voice of a young, teenager and at first the voice is super annoying but it slowly lulls you. It’s bewitching, which is what makes reading it so fun. It disarms your brain and lets you go with her through increasingly unlikely situations.

You think things like “Of course these bitchy junior girls are running the show.” Because apparently there are no senior cheerleaders at all, which could be possible but should be explained right? Especially in a book where much is made of the disparity between the varsity cheerleaders and the JV squad.

I’m not even going to touch the absurd murder-suicide mystery plot that steals much of the limelight from Beth and Addy (where the light belongs), but the way it unfolds and the coincidences needed to make it all work out are on the ridiculous side.

While the writing is lovely and the action quick and slick which makes the book so readable and enjoyable when you’re in it, once you’re done it feels unsatisfying. There is no character development. Addy’s a puppet whose strings are pulled by both Coach and Beth, though we never really understand why Coach chose Addy. Is it merely to piss off Beth? At least Beth and Addy have a lifetime of history together, Beth’s desire to be #1 in Addy’s heart makes sense, but none of Coach’s motivations and actions do. Is this merely the way a privileged woman who has been given everything her heart ever desired acts? I’m not sure and Abbott does nothing to clear that up.

Plus, there’s a few pivotal scenes where the writing gets a little loosey goosey and it’s hard to see or know exactly what happened. This is in direct opposition to the care Abbott takes in explaining the need for absolute rigor and tightness when it comes to doing cheerleading stunts. She should have taken her own advice to heart. What she’s given us is a pyramid that looks great at first glance, but upon closer inspection you can see the wobbly knees and rubbery arms that are about to cause its collapse.