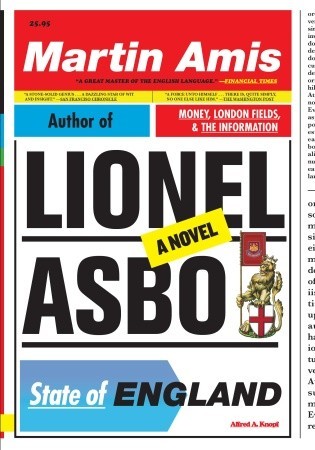 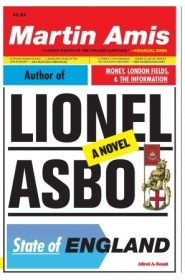 Desmond Pepperdine is terrified of his uncle Lionel Asbo. The slab-shaped man has been a full-fledged criminal since he was three years old. In fact, the Asbo stands for “Anti-Social Behavior Order,” and he’s legally adopted it as his official name. Now, in his twenties, Lionel fills a room. He’s always at least a size larger than Des remembers. He’s got two pitbulls he keeps mean by serving Tabasco-soaked steaks. Des suspects his uncle is smart, but his uncle is doing everything possible to kill that theory. While Desmond reads and works on self-improvement, Lionel talks about internet porn and carrying a weapon.

Des has a reason to be terrified: He’s been giving his grandmother Grace the beans. He’s writing a letter to the local advice columnist when Martin Amis’s comic novel Lionel Asbo: State of England opens. He knows this relationship is a bad idea, but maybe it’s not as bad as he thinks. They live in Diston, afterall, where certain things that are taboo in other places just aren’t as taboo. When Uncle Lionel hears that his mother has been groaning groans audible to her next door neighbor, he goes nuts trying to track down the sicko who would bang his mother, or as the classifieds refer to these scenarios, a GILF. Grace Pepperdine, incidentally, is 39: Old by Diston standards, though not so old outside of their town.

Turns out Gran is also getting friendly with another school-aged boy. Something happens to her young lover Rory, though who knows what. Maybe he’s dead, maybe he was sold into slavery. All that remains of him is the bloody lip ring that was yanked from his body.

Lionel is back in prison when he finds out he won the lottery. He’s serving time after a giant melee at the wedding of his ex-girlfriend and cousin. Lionel, the best man, started his speech by waxing romantic about his close, criminally-inclined relationship with his cousin, and ended it with an image of the bride voluntarily engaged in a pre-ceremony gang bang. He’s able to buy his way and everyone else’s way out of prison with the cash — and still has enough money left over to begin living large. He’s got a penthouse in a punk rock hotel, he’s got some fly threads, he’s constantly followed by the press. And he’s got a new girlfriend — selected from correspondences with women who contacted him while he was locked up. His special lady friend models herself after a high-profile pop star, which includes plenty of trips overseas, a collection of poetry, and a pregnancy.

After things end with his Gran, Des meets a nice girl, Dawn. They have a nice traditional life. Boy meets girl, boy marries girl, girl gets pregnant, and boy suffers all the quirks of pregnancy including weird craves and swelling. Lionel is still very much involved with them. He refuses to relinquish the bedroom he keeps at their apartment.

The first half of this book is really funny. It’s unconventional and has a great wicked humor. In one of the novel’s best scenes, Lionel’s brothers have gathered to have dinner with him. They’re building a serious tab when Lionel makes an announcement. While this crew, each named for one of the Beatles — including the lost Beatle, Stuart, — thinks he’s about to present them each with some cash, Lionel is actually got another way to help them out. He says that he will take care of putting Grace in an old-folks home.

After that, the book pretty much grinds to a stop. The jokes are still there, but the laugh-per-sentence pace becomes exhausting and some of the recurring themes become stale. There are more dramatic ripples, but because of the story’s tone they don’t seem weighty or interesting. The story has an oft-repeated quote that plays on old Baha Men lyrics, but the meaning behind this feels like a super elaborate joke set up with just a puff of a punch line.