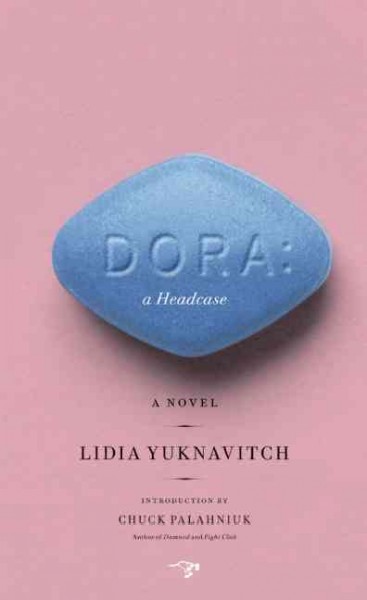 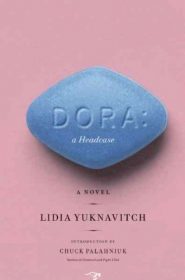 There are some things you should know about Lidia Yuknavitch: She is in the top tier of people making sentences in 2012. She packs more color into three lines of text than some people get into a photograph. And her voice is loud, man. Bold and unwavering, honest and fearless. Distinctly of this place in time. Like an alto opera singer performing an original pop song shredding Chris Brown. If your internet travels lead you to her byline, by all means read her.

Yuknavitch’s novel Dora: A Headcase is a retelling of the story of Freud’s Dora, a topic that is a playground for feminist critique. Whether that’s your jam or a real eye-rolling inducing prospect consider that you could read this story and know nothing of Dora, but suspect you’ve heard tell of her escapades on Nick Jr. Psychology 101 is not a prerequisite for this novel. Where Freud’s Dora was billed as hysterical, her dreams interpreted as sexual attraction to her father, Yuknavitch creates a powerful teenager who will use her sessions with Sig — as she calls him — in a massive work of art. She’s got a camera hidden on his desk and an audio recorder crammed into her Dora the Explorer purse and she’s got some moves from the Wile E. Coyote playbook to throw at her therapist.

Her real name is Ida, she’s in her mid-teens and her home life is beyond fucked. Mom, once a classical pianist, is now zombiefied by self medication. Dad is sawing away at the buxom Mrs. K while Mr. K has tried to jam his tongue down Ida’s throat. Ida has a posse of friends that includes Marlene, a transexual with hella maternal instinct; Little Teena, big, gay, and plays the piano like a dream; Ave Maria, the bulimic with a bank account; and Obsidian, a beautiful Native American girl who keeps a sharp piece of obsidian on a necklace in case she has to cut someone. Ida is mad about Obsidian, but every time things start to get pant-y between them, Ida blacks out. They create performance art, they dine and dash, and they trade prescription medication and literature.

Ida is troubled and brilliant, a dangerous combo meal for authority figures who abandon or otherwise ignore her or those who deconstruct her behavior and link it to sexual feelings toward her father. She’s a young artist and everything around her is fodder for her film: Sound bites from Sig, the metronome of her Doc Martens as she runs down the sidewalk, voicemail messages from a stranger who wants something from her. When, in the course of recording, she finds that Old Sig has big plans for his case file on her, she draws up a sophisticated retaliation that includes more than the recommended daily allowance of Viagra and a Farrah Fawcett wig.

This book isn’t perfect, but it’s an admirable stab at it. Sticking to the Dora template boxes Yuknavitch in a bit and occasionally feels like a forced bit of plot, specifically when Ida-Dora reveals her dreams and when she loses her voice. And sometimes her antics feel like the antics of Chuck Palahniuk’s casts of misfits as seen in his pre-Rant golden era. (Palahniuk writes the foreword to Dora and also lives in the same region, so it’s a good chance they are either drawn together as similar writers or are mutually influenced by each other).

But for the most part, it’s richly imagined, loud and strong, sometimes funny and has a delicious cameo from Jung.

Yuknavich’s memoir The Chronology of Water was released last year and is the better of the two books. But with Dora she shows versatility and the ability to use her skill set to build something completely different. With the former, she bores into your brain and it’s like popping Lortab and watching the jellyfish channel. With the latter she gives a cunning don’t-fuck-with-me edge and technological dexterity to a teen that has, for eons, been billed as “hysterical.”