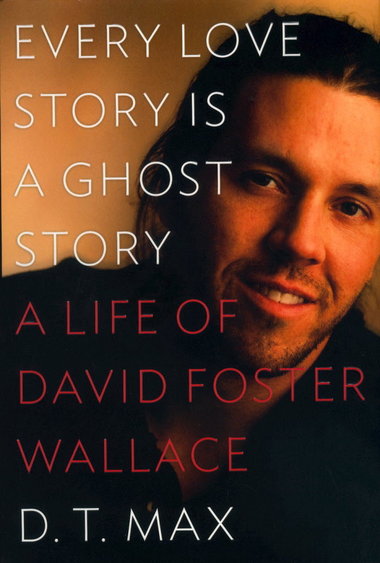 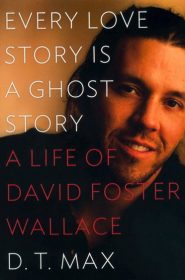 Reading DT Max’s biography of David Foster Wallace, Every Love Story is a Ghost Story, turned me into a spouter of DFW factoids:

“Did you know,” I wrote on a friend’s Facebook wall, “That Jonathan Franzen told DFW that reading Westward was like walking into a party filled with assholes?”

“Did you know,” I asked my boyfriend, “That DFW not only threw a coffee table at Mary Karr, he also tried to push her out of a moving car?”

Max’s is the first published birth-to-death chronicle of Wallace’s life and was born of a New Yorker article he wrote after the writer’s death almost exactly four years ago. It’s a compilation based on more than 100 interviews and letters from authors, editors, professors, lovers, family members and friends he met in recovery. When applicable, which is often, Max uses Wallace’s own writing to explain his mindframe, the direction his writing was leaning, his experiences and the depression that ultimately led to his death. Totally justifiable, as his fiction beat with plenty of truths. (Alternately, his nonfiction deviated from the conventional rules of journalism).

Did you know that one time DFW’s sister Amy Wallace said: “We all quietly agreed his nonfiction was fanciful and his fiction was what you had to look out for.”

There is plenty to think about on these pages: The seriousness with which DFW approached his writing, believing that writers not interested in the theory of writing were just entertainers; The ever-evolving influences, the easy dismissal of old influences, the super easy dissing of writers he didn’t respect and the competitiveness he felt toward those he did; The way he borrowed liberally from other writers and other lives; The amount of lies and embellishments with which he decorated his life; The balance of being the most mainstream of men, with his interests in pop music and thrillers, the anxiety and the addictions, but also a genius; That sometimes he was not very nice and did bad things — although this regularly resulted in some sort of written apology.

Most people who are willing to pick up the biography are going to be familiar with the bullet points of the story: Socially awkward acne-riddled teen with a sweating problem but decent enough tennis player goes to college at Amherst where he studies his ass off and impresses plenty of people, but feels embarrassed when he occasionally has to take time off to deal with his mental health. There is post-grad writing school in Tucson, Ariz., the publication of his first novel The Broom of the System, admission to the philosophy department at Harvard, which ends up being a bust and a super super intense relationship with writer Mary Karr — which the tattoo of her name outlives. The daily commitment to sobriety. Publication of Infinite Jest in all its episodes of editing nightmares and the anxiety of pre-pub chatter and post-pub book tours. Teaching in Illinois, relationships-hookups-relationships, more publication: novels, essays from magazines, math. Moves to California, teaches and writes and studies accounting for his novel The Pale King. Marriage, domesticity.

In this way, the book is a great way to trace the writer’s route. But there is panic in the final 25 pages, a real desire to set the thing aside and let DFW live on as a writer struggling with a way to write about boredom without making the story too interesting in what would be his final novel. You know he’s going to kill himself, how and where he does it and who finds him and it is ouch. The ending is very abrupt, maybe Max wrote it this way on purpose to mimic how fans who weren’t clued in at the time to the extent of his illness felt the day they saw the news pop up in a feed.

There is a noticeable distance from the subject and a sort of and then-and then-and then feel, which I suppose is the definition of “biography.” David Lipsky’s Although of Course You End Up Becoming Yourself, the transcripts from time spent with the author for a Rolling Stone story that was eventually killed, is — to keep the metaphor alive — the warmer, hands-on field trip. Plenty of times I wished he had written the book, but I suppose that would be absurd considering he’s already done his DFW thing.