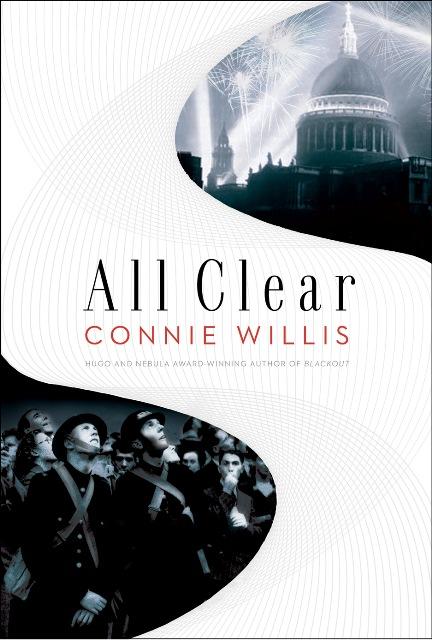 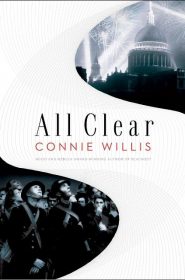 Earlier I praised Blackout by Connie Willis, and the follow up, All Clear, deserves just as much praise. I love Connie Willis. I had a panic attack after finishing All Clear because Willis is in her late 60s, but I decided that she is going to be the first person to live to 150, so we’ll see much more from her in the years to come.

All Clear picks up right where Blackout left off, with the three time-traveling historians, Merope, Polly, and Michael, stuck in London in WWII, still fearing they may be changing history. And we again see more of what it was like in and around London during WWII, including some insight into Bletchley Park where the Brits worked to decode Nazi messages.

All of the descriptions of the locations and happenings are just as strong as they were in Blackout, and I still think historical fiction fans would love it. What we get more in All Clear, and what I loved most here, are the relationships Merope, Polly, and Michael have with all the people they meet while stuck in WWII.

In Blackout we met many of the people in the historians day-to-day lives, but here the relationships grow and there are some smaller characters that I absolutely love. In London, Polly and Merope board in a house with cranky old women, boy-hungry young girls, and Sir Godfrey, a swoonworthy Shakespearean actor. Sir Godfrey and Polly become allies when the rest of the house insists they all put on plays for people taking shelter in tube stations. Sir Godfrey is smart, snarky, and I always had an odd feeling he knew Polly came from the future. He was just interesting.

But he wasn’t as interesting as Alf and Binnie Hodbin. I hated and loved those hellions.

Alf and Binnie Hodbin were two of the children Merope cared for when she worked at the English country estate where children were evacuated before and during the Blitz. At the end of Blackout she brought them back to London and their horrid, prostitute mother. In All Clear, Merope sees the Hodbins a lot and they are just as conniving as they were at the country estate, though Merope actually uses their trickery to help her in some situations, which was great. She grows a strong, almost motherly bond with them and I could’ve read about the crazy Hodbins the whole time. Binnie is probably one of my favorite characters because she’s a mastermind at causing trouble, but she’s also really smart, like a small scene where she talked about how much of a “noodlehead” Rapunzel was:

“Why’d Rapunzel just sit there in that tower?” Binnie asked. “Whyn’t she cut off ‘er ‘air and climb down it? That’s what I’d do. I wouldn’t stay in any old tower.”

This is a pretty insignificant scene, but it made me laugh and I started to look at Binnie as more than a troublemaker. She is really good at judging situations and solving puzzles.

And can I just applaud the end of All Clear? I really want to spill all the details because the pieces fit together so well in the last 200 pages. For some things I saw it coming, but I still couldn’t help but get sad and misty-eyed.

Overall, Blackout and All Clear are high quality, fabulous stories, but I wouldn’t expect anything else from Connie Willis.