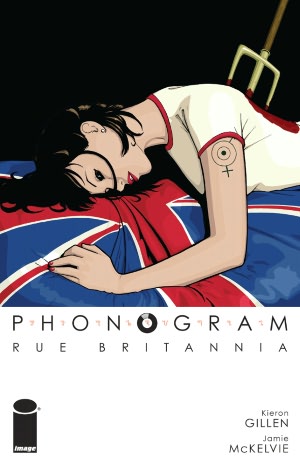 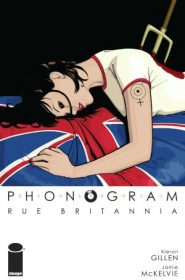 There’s a reason I don’t often read actual issues of comicbooks, especially of the superhero genre. Reading comicbooks you have to have a high-tolerance for ambiguity. You seems to spend a lot of pages wondering WTF and most of the time if you stick with it, the WTF comes clear and you can go about your way enjoying (or not) the story and the pictures.

Sometimes the WTF never comes clear and it completely ruins a story that has all the elements of awesome. This is the case with Phonogram: Rue Britannia by Kieron Gillen and Jamie Mckelvie.

It took me two tries to get through this one, because I refused to give up. From what I can tell there are people who are turned into Phonomancers, which means they can make magic through music. I think. I’m not entirely sure how they become Phonomancers or what they do when they become one. That’s where a lot the WTFness of this book came from.

So we got this Phonomancer David Kohl who has to race to make sure the goddess who turned him into a Phonomancer, Britannia, isn’t risen from the dead. I’m not sure what happens if she rises, all hell of some sort breaks loose, it’s never really explained.

What flows in between and around and through this race to find Britannia is Britpop. It’s on every page of this book and the parts I got I thought were great, but not being an aficionado on the history of British Pop Music, I think a lot of the book was lost on me. For instance, there’s a running joke about Kula Shaker, a band whose name sounded vaguely familiar from the days of MTV’s Alternative Nation, but who remained an unknowable entity even after I YouTubed some videos. Also there was a lot of tension about a member of the Manic Street Preachers who went missing.

I didn’t get it. A lot of it. Which is too bad, because the art is good and a lot of the subject matter they were dealing with was right up my alley but unless you’re well-versed in Britpop, I’d suspect a lot of the book will be lost on you too.