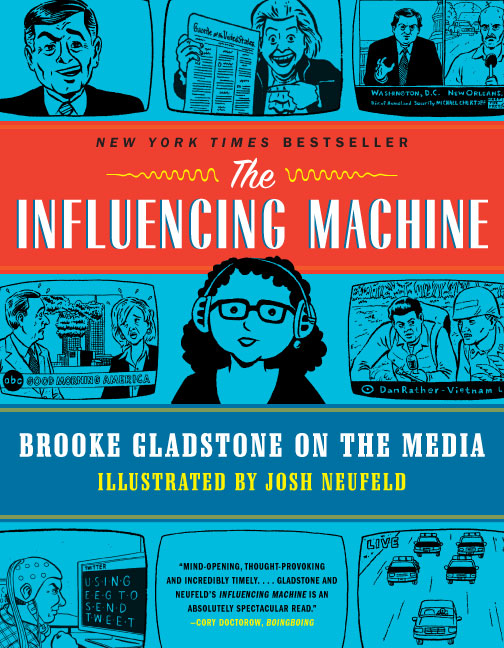 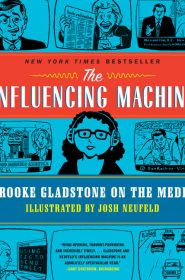 In the graphic nonfiction The Influencing Machine, Brooke Gladstone does for journalism what Mark Kurlansky did for Cod and Salt and Mary Roach did for Cadavers and the Afterlife: she makes it interesting, surprising, and funny.

Many of us bemoan that so much of our media is controlled by certain people, an influencing machine, spitting out lies to control the message, but Gladstone begins by flipping that idea and telling us that we really need to look in a mirror. The media is a mirror, giving us what we want to see. They rely on advertisers and need viewers, so the crazier our ideas get, so do theirs.

The Influencing Machine isn’t all about us and mirrors, but how it starts is what Gladstone does throughout the rest of the book – turn our ideas and commonly held beliefs completely upside down. She brings us from the beginning of news reporting with the Mayans and the Romans, up to present-day information overload, and even into future predictions of news media, and she does it all through short, fascinating stories with her interesting perspective and self-deprecating humor.

For instance, did you know that Alexander Hamilton used Treasury funds to start a newspaper supporting President Washington’s policies? And being annoyed by that, did you know that Thomas Jefferson stole money from the Treasury to start his own opposing paper? Little tidbits about media history make up the majority of this book and all of them are told in very short stories that quickly move on to other examples. I found myself wanting to know more about some of them, but that’s a different book. She uses short stories to prove her point and they are enough. If she would’ve explained all of Washington’s presidency to me, it would’ve been overdone.

All of the stories are accompanied by illustrations, and I did read this wondering why it had to be in graphic format, though I really did enjoy the illustrations by Josh Neufeld. Illustrations include everything from outraged presidents to depictions of war to present-day quotable tech and culture analysts like Lee Rainie and Nicholas Carr. Brooke Gladstone is also depicted throughout the book because she is our narrator through this journey, and some illustrations of her are laugh-out-loud funny. She is dressed up in costumes, portrayed as part-animal, shown a cast member of “The Matrix,” and a small illustration even has her topless. As I said earlier, she uses self-deprecating humor throughout because we always have to keep in mind, she is one of the journalists she’s lambasting.

Though don’t think this is all about scorching journalists. I think it’s laid out pretty well in that we hear the good and bad of journalists, governments, and consumers. We all have a hand in the influencing machine of media and that message comes across clearly in short stories, graphically displayed.

I did wonder if the graphic depiction of this would shortchange it, but I don’t think it’s lacking direction or content. There is enough content here to get across her message, but I found myself jumping to the back of the book to read the source she used so I could explore more about what she mentioned. I suppose that’s a good tell of nonfiction: if you can get me to want to know more, you’ve got me, and Brooke Gladstone told a good story and has me intrigued.