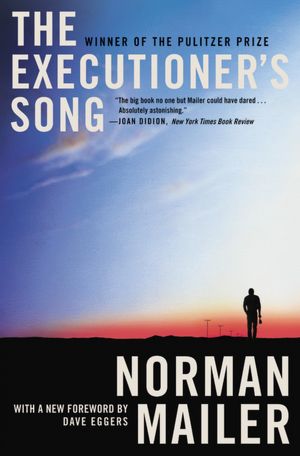 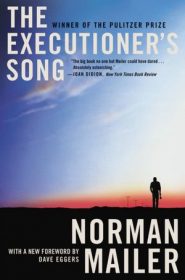 What you suspect is wrong with the true crime two-pounder The Executioner’s Song by Norman Mailer is confirmed when you watch the movie adaptation: The purposely visible fingerprints of Lawrence Schiller, the man who worked his ass off to turn the unprecedented story of a killer sentenced to death into a made-for-TV movie.

Gary Gilmore had spent most of his life incarcerated by the mid-1970s when he was released from prison and into the hands of his once adoring cousin Brenda in Utah. She sets him up with a room at his Uncle Vern’s house and he gets a job working in Uncle Vern’s shoe shop. But life on the outside takes some adjustments: Gary needs a car, Gary wants a girl, Gary likes to lift 6-packs from grocery stores. He bumbles along socially stunted and lacking impulse control. When he meets Nicole Baker, a 19-year-old, thrice married, mother of two, Gilmore goes gaga for her. They quickly fall into a passionate and super naked love affair filled with the kind of oozy goozy murmurs about fate and lifetimes and souls that are usually reserved for the bodice rippers that were hidden in clothes hampers 50 years ago.

But this sort of passion isn’t all skin-on-sweaty skin: It has a darker side. Gary’s jealous and abusive and Nicole is like a plastic bag in the wind, winding herself against whoever catches her mid-swirl. She leaves him and hides out with one of her many go-to dudes; Gary is dizzy with missing her and trying to find her and winning her back.

There’s other stuff going on, too. Gilmore’s got his eye on a pickup truck, an upgrade on the car he’s been driving. He spends plenty of time trying to talk a used car salesman into selling it to him. He’s quick to fight and his shoplifting is starting to make his family uncomfortable. He’s not exactly a model employee and he’s on his tenth and eleventh chances with the family and friend-like people in the small town.

One especially bad night he kills a man. The next day he kills another. He’s sentenced to death for the murders, but actually bringing an execution to fruition in Utah in the mid-1970s is almost impossible. Odds are, he’ll hang out on death row while his case moves slowly through the legal system. But Gary’s done prison and he’s over it. He wants to be executed, really he does, and he fights anyone who says it should be otherwise.

And this is why Gary Gilmore is famous: Sentenced to death, he accepts the sentence, no one else does. This isn’t much of a spoiler that he eventually wins. But how he gets from Point A to Point Firing Squad is the meat of the story.

It’s a great story, in theory. It’s about growing up in the prison system, family, big huge loin-throbbing love, and the death penalty. All of this is some pretty interesting shit. Unfortunately, Lawrence Schiller got involved and turned it into a project. A painstaking, thorough project. He hired teams to interview Gilmore in prison and he interviewed anyone who could tell him anything about Gilmore. He bought the rights to Gilmore’s story for $75,000 and while Gilmore hung out in prison waiting his fate, Schiller dished out pieces of the story to give it the sort of media spin he needs to retain the public’s interest in the case and make himself look less like a vulture.

All of the material Schiller had collected and assembled was handed over to Norman Mailer to turn into a book. More than half of the 1,109 page book is about Schiller’s work and the back and forth within the courts and the process of transcribing and interviewing. There is also an extensive cast list and the back stories on even the most minor characters. And when the movie, starring Tommy Lee Jones as Gilmore, is finally made, Schiller gets a character based on himself. Let me say this again: Schiller, the workhorse behind the book and the producer behind the movie is in both. The result is an obnoxious example of embedded journalism where the “I” character gets equal time to the subject.

(Speaking of the film, it isn’t much. It’s unorganized and seems to make an assumption that the viewer knows the story and can recognize the principals without introduction. It is, however, a nice time capsule of what the 1970s looked like. And for anyone whose first glimpse of Rosanna Arquette was the movie “Desperately Seeking Susan,” this is a softer introduction. She’s stunning as Nicole, a young-but-old, naive-but-wise, strong-but-weak woman so wholly invested in Gilmore that she’s willing to stuff a balloon full of suicide pills into a cavity so that Gilmore can extract it and down them — presumably while she follows suit with her own stash at home. She spends most of the movie topless and/or writhing on Gilmore’s lap and in the process makes a case for herself as having the most amazing breasts to ever dangle over a rib cage.)

Mailer isn’t completely without fault here. He’s the one who turned a 400-at-most page story into something more than twice as long. He wasn’t Schiller’s first choice to write it, probably not even second. In a recent interview with The Believer, Schiller said he ultimately picked Mailer “Because Norman had stabbed his wife, I felt he understood knee-jerk reactions to violence and what precipitates that kind of violence. That was a very basic, childish thought. You may not remember that Norman had stabbed one of his wives.”

The portraits of Gilmore and Nicole are very complicated and multi-layered and well done. Gilmore is a loose canon in the real world, but when he’s locked up a better version appears. He’s a gifted artist and writes terrifically romantic and naughty letters to Nicole. He’s got a wicked IQ and he’s solid at reading people and anticipating their moves and sometimes even manipulating them. He’s likeable, which gives his handlers pause. While they support him, no one wants to lose him. He’s also got a strong ethic, despite what he’s done. Nicole is as tricky. She’s a contradiction to herself, both dreamy and smart. She knows what she’s doing but she doesn’t. She’s stubborn and a romantic and torn between true love and earthly responsibilities. These two could stand alone as a story, with just hints and shadow of other characters in the background.

It’s a story that gets top billing in its genre, parked next to In Cold Blood in terms of journalism wrapped in novel form. Real interviews with real people in an attempt to build something as close to real as a writer can get without having personally witnessed Gary Gilmore lifting 6-packs from grocery stores and going buck wild about the lemon he’s driving. And on this level, it might be as close to perfect as something with this design can be — to a fault. It’s simply too much. Too many people, too much legal, too much back and forth, too many life stories. It just weighs too, too much. And the on and on comes to dilute the parts that are great.