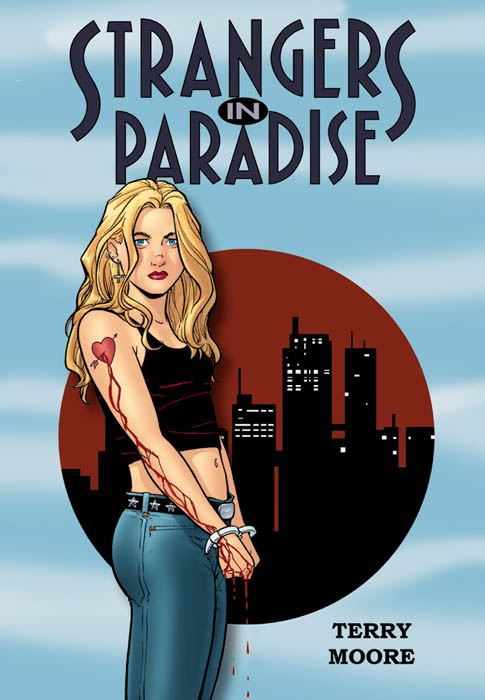 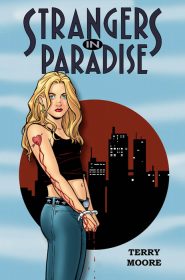 Remember that summer that you read Scott Pilgrim, lighting one book off the next, until you were dreaming in Pilgrim-ese and finished the entire series in what seemed like minutes. Then you went into that post-Pilgrim funk, missing those loveable — and sometimes infuriating — characters and thought that hole would never be filled. Then you said, “Screw it. I’ll turn this hole into a doorway into the graphic novel genre.”

You started searching for that magical series that would capture the inexplicable thing that Brian Lee O’Malley captured with those six volume. While you never found anything that made you feel like you felt when you scoured the city limits for the second and third volumes, you did stumble on some dynamite stuff that deviates from the whole dark-alley, caped do-gooder vein. So that was good.

I have a hypothesis: If Scott Pilgrim had never been born, I might have had a similar experience with Terry Moore’s Strangers In Paradise. I don’t have that same “Must. Buy. Book. Two.” rush, but that’s more because a) I now understand the addictive nature of a series; b) I’ve read more comic books since that summer. Scott Pilgrim had the added tug of being a first love. I will read book two, I just won’t be at the bookstore, blurry-eyed, when it opens tomorrow. I could probably even wait a month.

Pocket Book 1 of Moore’s series is the first 13 volumes of the story about Katchoo and Francine — longtime best friends and current roommates. The former has the hots for the latter and Francine has the playing-it-cools for Freddie Femur, her boyfriend for the past 364 days. Francine has slipped on her proverbial chastity belt for the length of the relationship, which really (ahem) rubs Femurs the wrong way. First he storms out of her apartment, then when she goes to make nice she finds him sawing away at one of the women who works in his office.

This enrages Katchoo, a woman one does not want to piss off. Consider this: She fires bullets into her alarm clock one morning. While Francine dissolves into self destruction, Katchoo finds a way to publically humiliate the jerk, first scaring the beejeebees out of him with a common kitchen utensil.

In the meantime, David has entered the scene. He’s an arty sort who is totally smitten with Katchoo and won’t take her “I don’t like men” for an answer. He inches his way into her life as a friends, but does nothing to hide his interest in more.

The first book includes an always-shifting love triangle, secrets will be revealed, characters will almost die, and some mysterious villains hunt Katchoo to shake her down for the $850,000 they believe she stole from the mob.

Oddly enough: I picked up Strangers in Paradise at one comic bookstore before walking into another one and having the owner recommend it to me. These kind of quirky coincidences always make it mandatory that I read the book in question.

This series is fun, funny, fresh, and sometimes almost sexy. Katchoo, part artist, part ass kicker,  is a sassy character. It leans a little too close to madcap and some of the poetic and lyrical moments are a little oh-for-crying-out-loud-ish, but whatever. It’s a good time.