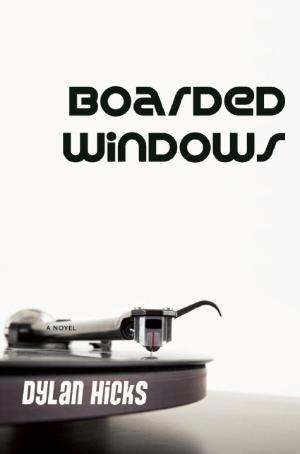 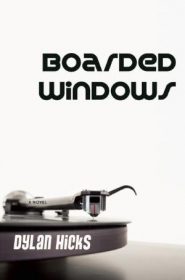 Wade Salem is a drifty, drug-dealing, storytelling, sometime musician. He’s fascinating, if you can experience him from a distance. He’s not the man you’d want as your father-figure, which is the case for the unnamed narrator in Dylan Hicks’ novel Boarded Windows.

Our poor unnamed narrator is slogging through life. He’s got a job as an assistant manager at a near-by corporate music chain. He’s got a live-in girlfriend, Wanda, he seems to dig. Things ain’t too shabby. They ain’t so good either. Then Wade Salem lands back in his life on a few months before Narrator’s twenty-first birthday. Narrator hasn’t seen Wade since his childhood in North Dakota where Wade up and left on Bolling Greene’s tour bus one night and never returned.

It seems Wade needs a place to crash before he jets off to be a radio DJ in Berlin. The one in Germany. The one far, far away from Minneapolis.

Wade and Narrator have a strange, passive-agressive relationship. They’re both smarty-pants knowitalls who are always trying to one up each other. A lot of the stuff they know was lost on this reader. Perhaps, I’m just not smart enough, but a lot of the references to writers and artists and thinkers were lost on me. I actually had no idea if some of the things Wade and Narrator talk about were real or stuff the author made up.

This is not a novel for people who like things to happen in their books. This is one of those thinky, introspective novels where very little happens physically but a crapton happens emotionally. It’s heavy and thick with nuance, one of those 250-page books that feel like 500 pages. In the hands of a lesser writer I’d have bailed early and without regret. These characters are in sore need of something to do, which I guess is part of the point, but still. Thankfully Hicks is an excellent writer and in Wade Salem he’s crafted a character that you kind of adore even though you know you shouldn’t.