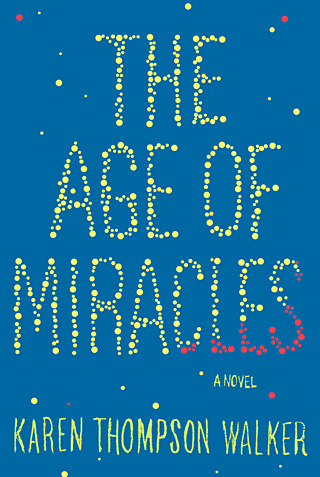 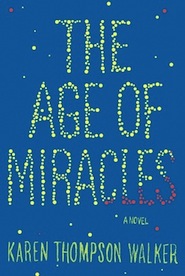 The world as everyone knows it is changing. For the residents of earth, this means that the planet has succumbed to something that has been dubbed The Slowing. For 11-year-old Julia, this is The Slowing — and the sort of junk a girl has to plod through in those days when a training bra is a want but not yet a need: friends, that dreamy skateboarder, the realization that parents are flawed, suddenly noticing one’s own growth of leg hair when in close proximity to a well-groomed and polished frenemy.

Karen Thompson Walker’s debut novel The Age of Miracles is a coming-of-age, dystopian novel as told by twenty-something Julia looking back on the year when things started to change. The effect is something painfully relatable, puberty, hip-checked into overdrive, global catastrophe. It’s a place where appeasing a self-conscious late-bloomer with the trite “Well, it’s not the end of the world” is, well, no longer a workable phrase.

It’s October before the experts go live with the information that the earth’s rotation has slowed. First fifty-six minutes, then more, have been added to the length of a day. The doomsayers strike immediately with full-fledged freak outs. The supply hoarding begins, people pack up and leave home to be with family or to band with those who have similar religion. The nightly news begins running a ticker that keeps a running tally of how many hours a single rotation currently takes. In the early days, there is no visual context for the shift. No burning or earthquake-like aftermath. People just stare at the sky and try to see something.

Similar catastrophic events are happening to Julia. The girl who is her best friend on the day the news breaks ends up moving to Utah with her family, leaving Julia alone at the bus stop with a handful of handfuls, including a pretty dude hound, a future sex offender in the guise of a preteen bully and, sigh, Seth with the hair and the skateboard. Then her best friend moves back with a new best friend, dropping Julia. On top of that, Julia suspects her dad is diddling her lovely and free-spirited piano teacher. Her mother is loading up on canned goods and having fainting spells and nausea.

Early on, Julia questions the links between the changing planet and her changing life.

“Who am I to say that the course of my childhood was not already set long before the slowing? Perhaps my adolescence was only an average adolescence, the stinging a quite unremarkable stinging. There is a such thing as coincidence: The alignment of two or more seemingly urelated events with no casual connection. Maybe everything that happened to me and my family had nothing at all to do with the slowing. It’s possible, I guess. But I doubt it. I doubt it very much.”

There is a beached whale epidemic and Julia wants a training bra. Birds are falling out of the sky and Julia can’t read Seth’s body language. Eucalyptus trees are dying and no one acknowledges Julia’s 12th birthday. And from the tense Julia is using and her acknowledgement of last grapes ever tasted, readers know she is telling this from a future — but not a future where this turns out to be a horrifying dream or scientists figure out how to lasso a meteor and get this puppy up to the right speed.

The countries unite and decide to stick with the set standard of a 24-hour clock, which mucks things up a bit. Sometimes it’s pitch-dark during school hours and sometimes the sun burns at night. A contingent of hippie-like dissenters decide to screw the clock in favor of following the earth’s rotation. This group, called Real Timers, are dissed and abused, victims of graffiti and scorn.

This story is heavy. If feels like soup cans strapped to your soul. The worst kind of doom story is the kind without a back door to sneak out of or the sudden discovery that this flashlight doubles as a weapon. There’s no place to hide because it isn’t just, say, a California suburb in trouble. This is everywhere. Eventually burrowing underground might help, but it’s just a band-aid, not a fix-fix. Maybe scientists are doing multiplication and testing earth acceleration equipment behind the scenes, but this isn’t on Julia’s radar. She just sees the birds dropping out of the sky, victims of a changed gravitational pull, and the whales gasping to death because of the shift in tides. It’s so well-imagined that Walker knew not to skimp on that early sense of excitement at the newness of this life and also knew that eventually this excitement would pave way to terrifying as it became the new normal.

And Julia, dear Julia, is such a great character. I have to believe at least a little bit of Julia lives in every 11-year-old girl. She’s socially awkward, sensitive, curious. She’s wearing the wrong outfit on her birthday and she bumbles through one of those dark-room-with-a-boy moments. She’s a perfect candidate to get pulled aside by an adult and told “Just wait until you’re all grown up. Everything is going to be okay.” Except it’s not going to be okay, and that’s what makes this extra great.