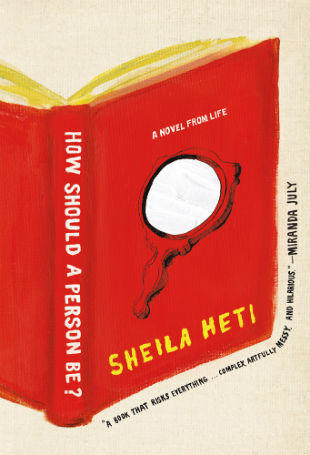 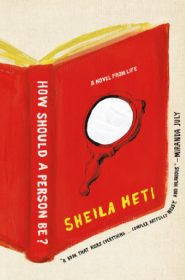 Sheila has been considering the sociological question of who and how we are. For years she has been asking the sorta novel’s titular question of everyone she meets: How Should a Person Be? Take the concept of responsibility, for instance, in all of its spectrums. Her friend Misha is a responsible person and it looks good on him, whereas her friend Margaux doesn’t have it and that looks good, too. She notices how people take cues from others in dress and gesture, and how relationships can be an interpretation of how the relationships around us are played.

Thinking about this is one of the things the character Sheila is doing instead of working on the play about women that she has been commissioned to write in the writer Sheila Heti’s self-described novel from real life. Neither Sheila nor Heti ever really gets to the root of the question, though, and instead the novel becomes about art, interpretations of beauty, and friendship between women.

Heti takes an unconventional approach to the novel, giving it just the hint of meandering plots and telling pieces of it in email exchanges and transcripts from recorded conversations with friends — mostly Margaux, a Canadian artist. It also has blurred lines between fact and fiction, as the characters are all the real-life Google-able people that make up the author’s friend circle.

Sheila is recently divorced, kind of picking at the aforementioned play and working in a hair salon. When the story starts, her best friend Margaux and another friend Shalom have decided to have an ugly painting contest. Which of these artists can create something uglier than the other one. They’re coming from two different places: Shalom is a schooled artist and Margaux is more of a feeling artist. The former paints his picture using all of the no-nos from art school and it ruins him. He feels awful, disgusted, and dirty in the aftermath. Margaux doesn’t immediately begin the project, which further rankles Shalom.

This is one of the book’s threads, second closest to being a plot line.

At the same time, Sheila has bought a tape recorder and has begun recording conversations with Margaux. Ultimately, this amount of intimacy between them starts to weigh on Margaux and comes to a head when the artist reads a piece written from time they spent together at a fine art fair in Florida. This causes a rift that triggers Sheila’s flight instinct and she runs away from home under the guise of working on her play in a different environment.

This friendship and its boundary issues are probably the central plot.

There is also Sheila’s relationship with an attractive tomcat in the sack named Israel that Sheila both likes and loathes. He asks for super specific sexual scenarios, like a) go to a restaurant wearing a dress without underwear; b) write a dirty letter as though you are at camp and can’t wait to get back to me; c) get horned up by said letter; d) let a stranger, a man deemed deserving of a small thrill, see your naked cooter; e) send letter. Sheila responds with shock at his audacity, but then carries out the mission with alarming results.

This back and forth with Israel provides the novel’s much-needed moments of comedy.

So is it any good? Yeah. It succeeds in being different with its loose plot, alternative modes of storytelling, and the honest way that it captures the day-to-day of being a human being today. The characters are interesting, though since they are snatched from real life, this has less to do with Heti’s creativity than it does with her ability to have cool friends with interesting lives and who sometimes have engaging conversations. There is also an element of bravery here, as Heti’s character Sheila is kind of awful in her neediness, selfishness, obsession with fame, and overwrought responses. When she takes off, upset, to run around in a field and freak out it sounds very liberating and cathartic, but it is also a bit much. And when quips and artistic visions seem to fall seamlessly from the minds of her friends, her own contributions to the conversation seem forced for the sake of hipster wittiness. At one point she suggests to Margaux that if they ever have babies she thinks it would be a nice idea to trade the kids with each other.

It’s so well written that it barely feels like reading. And there are some cute moments and ideas that everyone must feel deep down.

When she is craving a grilled cheese sandwich, can actually picture it in her head and ends up with something that doesn’t meet her expectations she says a sort of cute bit of seeming nonsense that actually becomes a nice life lesson:

“Better to have a good imagination than a good grilled cheese sandwich.”

Mostly this novel reminds of Miranda July’s non-novel It Chooses You in how it is seemingly the product that resulted when a writer was hiding from a different project. July’s story came from an obsession with items sold in the Penny Saver while she was stalled writing her movie “The Future”; Heti’s is born of buying a tape recording while on the lam from the play she is supposed to be writing. (Though July finished her movie and Heti quits her work on the play).

At one point Sheila tells Margaux: “I like boring people. I think it’s a virtue. People should be a little bored.” I think Heti accomplishes this. Not by the conventional definition of “boring,” but by squeezing mundane moments to the surface of the story and still creating something interesting and highly readable.