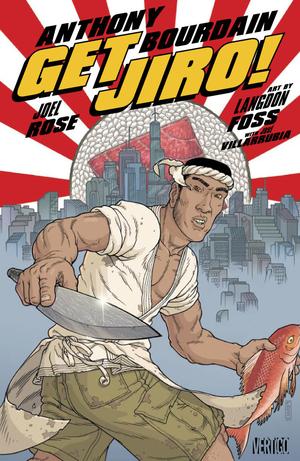 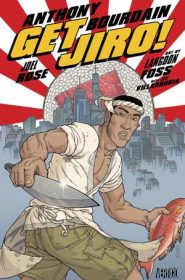 The first mistake the dudes make is reaching for the soy sauce. They load it up with gobs of wasabi. Then one has the audacity to ask the calm cool genius sushi chef at the center of Anthony Bordain’s (and Joel Rose’s) super fun graphic novel Get Jiro: “Hey chef, got California Roll on the menu?”

That’s when Jiro first shows off his knife work, separating the dude’s bluetooth-adorned head from his body. This isn’t the first time Jiro has gotten behead-y with his blade. When the foodie 5-0 arrives on the scene, they briefly acknowledge that this is the third time this month the parking lot is going to have to get swabbed down. Then they ignore the headless man, speak to the virtues of good rice and ingredients, and are on their way.

The story is set in a futuristic version of Los Angeles after the fall of Hollywood and the music industry. Just the food biz remains and the top dogs are Bob, a celebrity chef and big box restaurant owner, and Rose, a vegan locavore who runs the kitchen like a hippie cult. The mysterious Jiro owns a small Japanese restaurant in an out-of-the-way strip mall next to a porn shop and a taco cart. He’s a well-kept secret until he kills the diner — a guy with underground connections to produce. Now that Jiro’s on the radar, both Bob and Rose want Jiro on their own team. Jiro never sweats any of this and finds a way to foil both sides until something like a food industry civil war erupts.

It has Bourdain’s colorful words and the kind of snarkiness he shows when he plays judge on “Top Chef” and refers to a dish tasting like “doll heads.” No one is safe from getting knocked down a few pegs: Not guys who wear a bluetooth, not people who make reservations years in advance for that special restaurant, not people who like things super-sized, not people who like to eat locally-grown food, not vegans or freegans, not the Japanese mafia. No one. He also takes a scene from his own life, a rare dining experience he wrote about in his memoir Medium Raw and turns it into a blood bath. (He frames the vegans by making sandal prints in the blood).

The art, by Langdon Foss and Jose Villarrubia, is super fun and busy and you can spend a long time looking at a panel for all of the funny little ticks.

I’ve been checking on the status of this graphic novel since it was first announced, it seems like forever ago, but it was actually a pretty fast turnaround. It’s the random pairing of two things I really dig: Bourdain’s words and graphic novels. Plus, it has Japanese-style horror elements. It is a total blast.