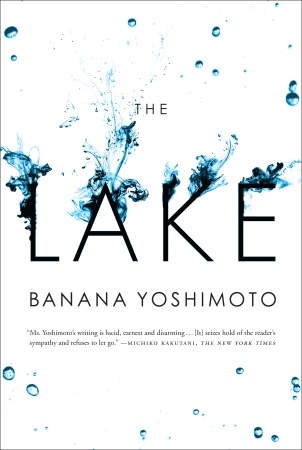 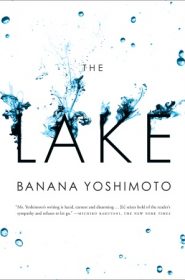 Chihiro’s got a dead mom who was a club owner in Japan, and a strained relationship with her father, a businessman who never married her mother but maintained a solid relationship with her in a sort of “playing house” kind of way. She’s an artist looking for distance and a new life and sets up shop in a new town in an apartment with a view of a mysterious dude who is always looking out his window.

The old window-to-window turns into a face-to-face something like a relationship in Banana Yoshimoto’s slim novel The Lake.

Nakajima is just as mysterious in person as he was from a distance. He doesn’t reveal a lot, but does reveal that there are reasons for not revealing why, for instance, he’s not super into doing it or why it is a comfort for him to sleep with a wire rack from an oven. She passes her time painting a mural on the side of a doomed community center and Nakajima studies biology and cleans her apartment and creates delicious meals. Chihiro feels that she is falling in love with him, or at least something close to love. More like two people clinging to each other while the world bucks and spins.

As part of Nakajima’s healing process, he decides he needs to see characters from his past — a brother-sister team he grew up with. They live out in the country in a little cottage next to a lake. Mino is the voice of the sibling-hood and Chii is a sort of bedridden medium who sends her words and what she sees through her brother. Chihiro is drawn to them and even makes a return visit where she comes to a better understanding of her boyfriend.

There is a great mysteriousness to this book that was completely ruined by the description on the inner flap that totally reveals what’s up with Nakajima so that when the big duh-duh-duh happens it’s like, “…”. And, admittedly, it isn’t exactly written in a way that causes a bang. It’s more like Chihiro figures out the big secret in a sort of unwinding way like unraveling a spool of ribbon instead of hurling the spool through a window.

So that kind of breaks the book. Also there is some weird repetition as Chihiro considers her relationship with Nakajima. I’m going to blame that on the translation. Other than that, I do like how the book was written. It has an easily visualized dreaminess to it and characters that fall so far from stock that you really have to bend to feel like they feel. I didn’t love this book, but it made me Banana Yoshimoto curious.