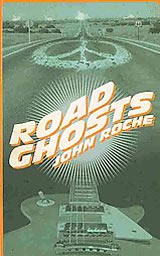 Today we finish off our trifecta of poets answering our questions with John Roche. He’s not a Minnesotan, but we’re bending the rules since he’ll be reading at 7:30 p.m. tonight at Magers & Quinn (3038 Hennepin Ave. S) with Jules Nyquist and Freya Manfred.

John, an Associate Professor of English at Rochester Institute of Technology in Rochester, New York, earned his PhD from SUNY Buffalo, studying with Robert Creeley and John C. Clarke. He will be reading from his latest book of poems, Road Ghosts.

Currently reading quite a variety. Started Philip K. Dick’s novel The Game-Players of Titan on the plane to Minnesota, and expect to finish it on the ride back. Just finished a novel by recently departed former Michigan State colleague Hugh Fox, Depths and Dragons. Also reading new book of poems in honor of Chinese poet T’ao Ch’ien, published by FootHills Publishing (one of my publishers), and edited by Michael Czarnecki. Also been rereading John Clarke’s In the Analogy, a collection of more than 200 neo-sonnets from Shuffaloff Press in Toronto. Jack Clarke was my teacher at the University of Buffalo many years ago and we recently did a panel in his honor at the Poetry of the 1980s conference in Orono. Also reading the new issues of Rootdrinker, House Organ, Malpais Review, among other magazines. Ed Sanders’ Fug You. And Robert Duncan’s The H.D. Book.

Lily Bart from The House of Mirth. Or maybe Tess of the d’Urbervilles.

That would be Walt Whitman, and we’d go to some neighborhood bar that has good local beers on tap. Jules Nyquist suggests The Black Forest in Minneapolis.

The Jungle, by Upton Sinclair. And the poems of William Blake.

Joyce’s Ulysses. Or maybe Lao Tzu’s Tao Te Ching. The long and the short of it. So you see my dilemma!??