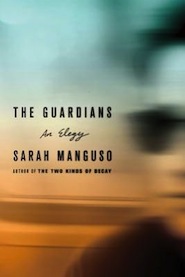 The thing with death is that the solution key to so many mysteries, including the final whys and hows and “what does that feel like,” all get buried with the body. In the case of Harris, the inspiration for Sarah Manguso’s elegy The Guardians, there are an additional ten hours worth of mysteries that occurred between when her friend left the hospital without money, a phone, or identification, and when he tossed his own body in front of a train.

Manguso met Harris in college and was good enough friends with him to get invited to his family’s home for a holiday. They lived together with a handful of roommates for awhile in New York City in a loft with makeshift cubicle style rooms. And when the World Trade Centers fell, it was his arm around her and his out-of-town getaway stop where they took refuge in the aftermath. Between them they had inside jokes and a poem by Mangusos. They had drinks and birthday cakes and conversations about the size of his junk.

So what happened to Harris: He’d been hospitalized twice before and it’s his third stay when he walks out the front door, does something indiscernible for ten hours, then jumps in front of a train. Manguso can’t remember exactly when she last saw him. She’d been abroad for a year. Now that he’s gone, he’s stuck in her craw. This story seems to be a way of exorcising him, or considering what happened.

Manguso isn’t interested in a journalistic account of events. She doesn’t want to interview the conductor from the train or Harris’s parents. She’s also not interested in writing fan fiction to invent the missing ten hours. She has some hypothesis on the whys — ranging from the side effects of his medication or being encouraged by a dybbuk. Manguso’s background is poetry, which she uses to create memory vignettes.

I don’t find this kind of writing lovely, I find it annoyingly coy. Her sentences dance around the edges of what she means. Like: She refers to her now-husband in memories as “The man who wasn’t yet my husband.” Occasionally all that swirling pushes out a great sentence or a great idea. But for the most part it feels like reading vague status updates from your most emo Facebook friend. Some people would like the way this is written and I can appreciate that. But it’s a stylistic issue for me and this just feels too super-serious and purposefully fuzzy.