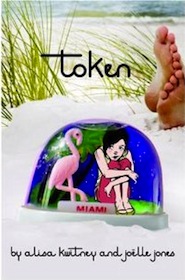 Sometimes I get tired of the Holden Caufieldization of young adult literature. Why does the protagonist always have to be a friendless misfit? A lot of times the main character is friendless because they like vintage music (or, you know, the kind of music I, an adult like), reading books, and generally being a little sardonic when it comes to the people in their age group.

Maybe I am hopelessly out of it. I haven’t been a teenager for many, many years. Perhaps this is exactly the kind of thing that would make someone a friendless loser now days. Perhaps this is total bullshit. I think the loner is supposed to be symbolic of something, but I’m not entirely sure what anymore because it’s so overused. Is it the alienation of modern-teens? Is it that nobody will appreciate you until you’re older and see how cool you really are? Is it that it’s too hard to write about kids who feel lonely and alone even though they have friends?

Token, a graphic novel by Alisa Kwitney and Joelle Jones, suffers from this arbitrary Holden Caufieldization. In it, main character, Shira, is ostracized because she lives in a Miami hotel with her widowed father and grandmother. At least I think that’s why she has no friends. I wasn’t entirely sure. She seemed perfectly smart and lovely. She didn’t even have that sarcasm thing that a lot of Holden-y characters have.

Because she has no friends Shira spends a lot of time with her grandma and her grandma’s BFF, who used to be a Hollywood starlet back in the thirties or forties. One day while hanging out at the beach, Shira meets a hunky Spanish dude and is instantly attracted to him. Meanwhile, Shira’s dad decides to do start up a relationship with his secretary and Shira doesn’t get invited to some popular girl’s birthday party.

Shira takes her teenage frustration out on her dad and the local Woolworthy’s where she develops a shoplifiting habit thanks to the instruction of the Spanish hunk. Other things happen like the decline of her grandma’s BFF and the growing relationship between the dad and the secretary, but it’s of little consequence.

This one is just a heap of your standard teen-dramas cliches accompanied by some pretty pictures with a happily ever after ending. It’s kind of hard to get too hopped up about the cliches or why the story was mysteriously set in 1987 (there was no 1987ness inherent in the story) because it only took thirty minutes read.