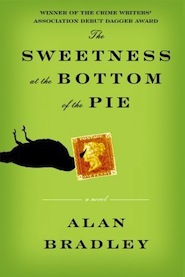 I don’t read a lot of mystery, so when people recommended The Sweetness at the Bottom of the Pie by Alan Bradley to me, I just wrote it off as another mystery where there is a dead body and someone is investigating the murder. This is what The Sweetness at the Bottom of the Pie is about. Within the first couple chapters there is a murder and the rest of the book you piece together clues to figure out what happened. This part of the book wasn’t all that interesting to me. What was interesting, and why I liked this book, is Flavia de Luce.

Flavia de Luce is the eleven-year-old amateur detective in this book and she is obsessed with science and chemistry, particularly with poison. Set not too far after World War II, Flavia lives on a big English estate with her father and two sisters, seventeen-year-old Ophelia (Feely) and thirteen-year-old and Daphne (Daffy). Their mother disappeared years earlier, when Flavia was a baby, and she has been pronounced dead. In the future I have a feeling the mother will suddenly appear, or someone will impersonate the mother, because this is the first Flavia de Luce book but others have already been written.

As for this book, Flavia becomes an amateur detective when a man is murdered in their garden and her father is blamed for the crime. She takes to her bike to find clues in the library, the local hotel, and even in the school where her father was a classmate of the murder victim. We learn about her father’s stamp collecting and magic illusions and all of it goes into play when it comes to what really happened with the murdered man.

But as I said earlier, all of this wasn’t that interesting to me. For mystery fans they may eat this up, but for me, my favorite part of the book is Flavia. I mentioned earlier how she likes poison, and that’s how we start off learning about her – she is poisoning her older sister Feely. Feely isn’t all that nice to Flavia, even locking her in a closet, though Flavia pushes Feely’s buttons all the time, so they both are to blame. Feely is more about possessions, boys, and looking good, while Flavia wants to spend her time in her lab. She has her own science lab in their huge house.

But back to the poisoning. Fed up with Feely, Flavia steals her lipstick and adds poison to it, the same kind we’d get with poison ivy, and monitors her sister’s lips. Multiple times throughout the book Flavia jots down messages in her diary about how the test subject is reacting to the poison.

This is why I loved Flavia. We’re introduced to the heroine at the beginning of the book while she’s poisoning her sister. I would read a book all about Flavia, mystery or not. In fact, I think there could be great books written about her that didn’t involve her solving crime.

So this book is cute, and for mystery fans the mystery may move you along, but for me it was Flavia. I just wanted to know what situation she would get herself into, how she would get out of it using her wits or science, and how she continued to poison her sister. Admit it, didn’t we all dream of poisoning our sisters when we were young?