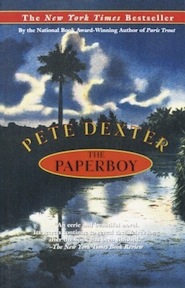 In The Paperboy, Pete Dexter sets a sibling rivalry into the humid crucible of northern Florida, adds a murder mystery, and then stirs in traces of sexual intrigue. Altogether, it’s a recipe for a strange and captivating read.

The swampy realm of upper Florida, which might as well be a world away from the sanitary, Disneyfied portions of The Sunshine State, is the real star of The Paperboy. This subtropical realm, with its tangled woods, labyrinthine waterways, and backwater folk is what gives the novel its distinguishing characteristics. And that’s saying something, given the other characters that populate this novel.

There’s Ward James, an almost robotically dogged investigative reporter for The Miami Times. There’s Hillary Van Wetter, an inscrutable redneck convicted of killing a sheriff. And, most compellingly, there’s Charlotte Bless, a woman who is captivated by incarcerated killers and enlists Ward to write a story on Van Wetter’s botched conviction so his innocence can be proven.

Dexter has vision, but at times his execution falters. His symbolism – a live chicken left as alligator bait greets Ward when he arrives to interview Van Wetter’s uncle, a hurricane hits land during an ill-advised wedding – is about as subtle as the knife that “opened the sheriff from one end to the other.” And after finishing this book, I had to second-guess his sense of pacing. Is it still an eleventh hour revelation if it comes at 11:59, or is it just too late?

But I’d take an author with vision over one with immaculate mechanics any day. In the end, The Paperboy is strange, challenging, and not entirely forgettable.