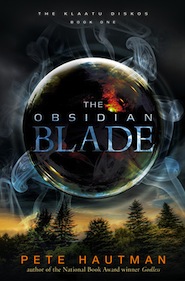 The Obsidian Blade is the first Pete Hautman book I have ever read. I feel really ashamed saying that.

I know, I know, it seems like I should’ve been reading Pete Hautman forever. Winner of the National Book Award for Young People’s Literature? Check. Friends praise him? Check. A lot of books full of mystery, sci-fi, and fantasy? Triple check. He really should’ve been on my Goodreads “read” shelf a long time ago, especially if all of his books are as awesome as this one.

The Obsidian Blade is the first in the Klaatu Diskos trilogy where we meet Tucker Feye, a 13-year-old living a simple life in Hopewell, Minnesota with his mother and preacher father. Things seem to be picture perfect for young Tucker until the day he sees his father, who was fixing a shingle on the roof, disappear into thin air. Before he disappeared Tucker swore he saw a shimmering, disk-shaped hole floating next to the roof. Did his father fall through the hole? If so, where did he go?

Hours later Tucker’s dad walks up the driveway, his clothes tattered, with a mysterious girl, Lahlia, by his side. His dad declared there was no god and they would need to find Lahlia a new home. Tucker begged for answers to what happened, but his father refused to tell him or Tucker’s mother.

Shortly after his father’s return, Tucker’s mother starts to go downhill. She withdraws from the family, becomes obsessed with numbers and puzzles, and eventually starts to go mad. Needing to get her better treatment, Tucker’s father leaves a note for Tucker saying that his brother will come watch him while they try to get treatment. Tucker notices their car is still in the driveway but a ladder is propped against the house, leading up to the roof. Does this have to do with the disk-shaped hole?

Uncle Kosh is the uncle that shows up to take Tucker back to his house while his parents are gone. While living at his uncle’s house, Tucker continually thinks about the disk-shaped hole and slowly starts to discover more about it, his past with his uncle, and his future.

As I write this I realize how hard it is to explain this book. I really can’t explain too much more because A) it’ll sound crazy without you reading the whole book and getting the big picture, and B) I don’t want you to not read it because you think it’s crazy.

What I will say is that yes, Tucker’s father’s disappearance does have to do with that disk-shaped hole in the sky. They’re actually called diskos and they are awesome and terrifying at the same time. They are the ultimate test for that disobeying instinct in all of us. You know the one, the instinct you have that makes you want to do something people warn you against. Someone says, “Don’t open that door. It hasn’t been opened in years, who knows what’s in there.” It makes you want to open the door, even though you know it could be bad. It’s that instinct to want to know and to disobey. This is what the diskos do to us. They are windows into different places in time, past and future, but almost all of them bring you to a sad or dangerous place in time, like New York on 9/11. But you don’t know where each diskos will take you. See the dilemma? You see a diskos and you know it’s probably bad, but you have no idea where it leads and aren’t you just a little curious?

I would jump through every diskos I saw. And thankfully there is a lot of diskos jumping in The Obsidian Blade.

This is definitely a great sci-fi romp through time, and the kid in me was fascinated. But the relationships here also fascinated me. Tucker and his parents get along great, but when things come between them, namely religion, how do they cope? And what about Tucker and his Uncle Kosh? Uncle Kosh is very different from his father and Tucker is completely turned off at the beginning, but a bond eventually grows and I really loved them together. The mysterious girl Lahlia also has an interesting relationship with Tucker. She knows more than she’s willing to tell, though she does release information a little bit at a time to Tucker. I just know more is to come between Tucker and Lahlia in the future.

There are also really interesting discussions about religion throughout the book. Does god exist? If so, does he agree with all of the religious rituals we do, even when they are extreme? And what about Jesus hung on the cross? Is it all we imagine or have we built it into something more? All of this is very thought-provoking but never preachy.

I could go on and on about The Obsidian Blade because it really does have layers. You could read it simply as a great sci-fi, time travel book and you would be completely satisfied, but there is also so much more here. What a great book, Pete Hautman. And I’m so sorry I haven’t read you sooner. I will rectify that, I promise. I think Rash sounds really interesting, so while I wait for the second book in this trilogy I’ll check that one out. And, yes, I’ll eventually get to your award-winning book, too. Hell, if all your books are as good as this I’ll eventually get to them all.