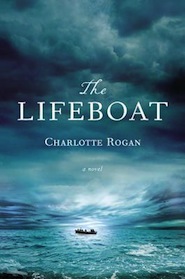 About the time the members of Lifeboat 14, at just over max-capacity, start beating the straggling survivors who are clinging to the side of their boat, you know that Charlotte Rogan means business with her debut novel The Lifeboat.

This story is not about some hiccup in a three-hour tour. This is closer to The Lord of the Flies. The result is a delicious evil fun wrapped in think-y moments. You’re going to have to dust off your most sinister chuckle while you blow through it. People are going to die in some fantastically sinister ways.

It’s the late 1910s and the Empress Alexandra is headed to America when there is a fire on board and the ship sinks. Some of the passengers escape onto lifeboats, including the lovely Grace Winter, whose back story becomes increasingly more complicated as the story goes on. The gist: She was on the ship with her new husband who is (was?) ridiculously wealthy. They still have to tell his mother — and his former fiance — that they’ve wed. Their time aboard the ship had been lovely, but included some curious moments between her husband and business contacts and unexplained alliances. As the ship sank, she was tossed into a lifeboat at the last second, also under unusual circumstances. Now here she is with thirty-eight other survivors orbiting the area where the boat sank and waiting for rescue.

Mr. Hardie, who was part of the ship’s crew, takes charge of the lifeboat with a like-it-or-lump it philosophy. Sure, they can pick up the toddler in the water who is clutching his mother’s dead body, but who wants to trade places with him? So they leave the kid. Hardie repositions the passengers for optimal weight distribution. He doles out assignments –rowing, bailing, and horizon scanning. He rations water and kills fish — until that luck runs out. And he regularly calls for volunteers to sacrifice themselves for the safety to lighten the load of the boat. Some even take him up on it.

Meanwhile, another leader is emerging. Mrs. Grant provides one-on-one comfort and questions the tactics of this self-promoted captain. As days pass and a few passengers die, she becomes stronger, having never gone along with any of the more controversial life-saving tactics that have happened on board. Soon the boat has divided loyalties that comes to a fever pitch when Grace has to decide which side she is on.

You know that Grace survives all of this. When the story opens she is on trial and her lawyers are kicking around her level of sanity. The reason for the trial is revealed at the height of the story and it’s a dizzying scene.

Grace Winter is such a great character. She’s cunning and a survivalist. She’s done some naughty things in her day in order to stay in the game after a family tragedy. Also things just happen to her and the muffin always lands butter side up. She’s got some wonky ideas about male superiority, but it’s more a symptom of the time period. In a setting that is ripe for hallucinations and confusion, truth is hard to discern — which totally adds to the intrigue.

Like any novel where most of it happens on the ocean, there are big metaphors in play. And lots of morality and mortality questions come into play. Rogan handles the unraveling of civilized behavior in a super subtle way.